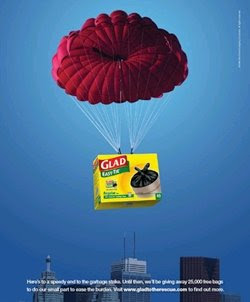 A city-wide garbage collector strike in Toronto has been in place for almost a month over protests about sick pay and benefits. This means that people in the city have been taking their rubbish to temporary dumping sites in parks and car parks. Residents have been asked to double bag their rubbish and collect recycling in clear plastic bags. Bin bag brand Glad saw an opportunity to help Torontonians.

Glad has donated 25,000 bin bags and clear recycling bags to the people. A Glad “Clean-up Crew” has been recruited to distribute the bags at various locations, with a list of times and places found at Gladtotherescue.com, along with news and maps. Glad will also hand out information about how to manage garbage during the strike and a coupon to redeem $1 off any Glad product.

The move was supported by full page ads in the Toronto Star and the Toronto Sun. Glad had done something similar in the aftermath of Hurricane Katrina in New Orleans, donating trash bags to the city as part of its "Glad to Help" scheme. 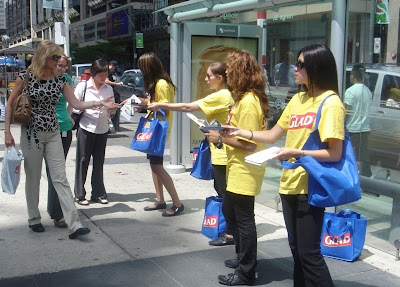 US-based estate agent Coldwell Banker wanted to demonstrate the brand’s investment in innovation and the fact that it welcomes consumers any time, anywhere.

The company has a long track-record of embracing new technologies to sell its wares, and its latest endeavour is no different. The brand has taken over a billboard in Times Square, New York, to showcase some of the houses it has for sale. But there's a twist: the interactive billboard will display homes from requested post codes in real time. Passers by just text the word “homes” and any post code to a number on the billboard and a range of three houses appears in three different price ranges. They also receive a text from Coldwell Banker directing them to a link with more information about the listings.

The campaign also features portraits of the company’s founders, Colbert Coldwell and Benjamin Arthur Banker, who started the company in 1906. The founder portraits offer witty comments about New York and modern-day technology, mirroring the commentary they provide in related TV spots. 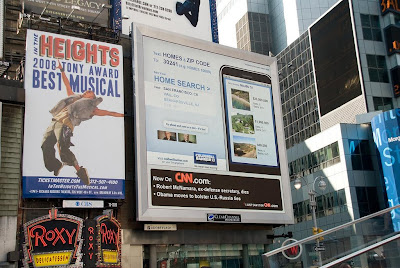 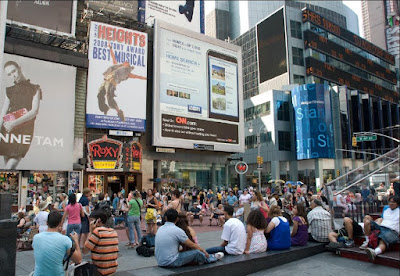 Nokia wanted to promote its N96 handset, which featured a five megapixel camera and functions that make it easy share photos over the internet using the Ovi Share website.

It was important for consumers to understand what differentiates the N96 from other mobile handsets. Out-of-home was used to do this both visually and experientially.

The campaign was split into two phases.

The first phase included strategically-placed billboards in major districts. LCD screens were placed in the centre of these specially-constructed billboards to bring the N96’s high resolution camera to life.

The campaign resulted in great awareness of the product and tangible understanding of its benefits. 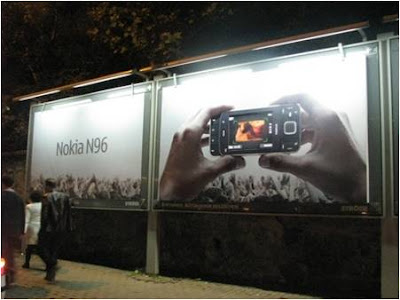 Email ThisBlogThis!Share to TwitterShare to FacebookShare to Pinterest
Labels: Nokia, Telecoms and electronics

Magimix::: “Only The Strong Survive”

The National Lottery :::How Not to Make a Viral video

The National Lottery is launching a nationwide search for a unique viral idea, to celebrate its 15th anniversary. With the help of best-selling author and TV personality Danny Wallace, the Viral Nation competition is a chance for people to submit an idea to show how Lottery funding has had a positive impact on them or their community. This idea will then be produced by a team of experts into a viral video.

To promote the competition, Danny Wallace stars in the How Not to Make a Viral video which takes a look at the things to avoid when making a viral, including hilarious spoofs of famous virals Where The Hell is Matt? and Keyboard Cat. 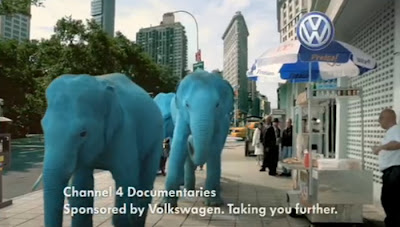 Email ThisBlogThis!Share to TwitterShare to FacebookShare to Pinterest
Labels: Brand-Co

Email ThisBlogThis!Share to TwitterShare to FacebookShare to Pinterest
Labels: OUT OF HOME, Telecoms and electronics

VISSUMO is a provider of next generation touch technologies for industrial, architectural, retail, transportation, instructional, and entertainment applications. The company has recently undergone a name-change, from Infini Touch to VISSUMO, and it was my task to create the new logo and business card.

My client expressed concern that it would be too difficult to capture the company technology using an image or mark, and a logotype was preferred from the outset.

This ties in with a rule I like to follow revolving around company names — an interesting or original name (such as Vissumo) should utilise a simple design (think Google), whereas a generic name should show a more complex design (think Sun).

Specific keywords for the project were clean, professional, durable, and technology-based (which gave me thoughts of a sans-serif font).

A visual slice has been taken from the text, leaving a symbolization of two surfaces — the finger and the touch-screen. The slice doesn’t travel the full width of the company name, with the leading character (V) forming the connection that drives the technology.

The typeface used is Verlag Black, by H&FJ.

The designer who came up with the VISSUMO name wanted to create a “visual” reference, with “sumo” having a size connotation. This design idea splits the syllables, placing emphasis on the visual, and incorporating a surface-like mark.

The typeface used is Knockout Sumo.

We experimented with a number of different colours, with the final decision coming down to either red or blue. As one of the main competitors uses red (3M Touch Systems), the options (above) were decided against, and you can see the chosen blue below.

The unique selling point is that users can interface with any semi-rigid touch screen surface — glass, plastic, metal, stone, wood, ceramic, or a combination of materials.

VISSUMO touch screens can withstand the force of a 9mm bullet — impressive (Engadget thought so too).

Test video #54 (spray paint vandalism) is another I liked, and you can view more VISSUMO video demos here.

Because of a spin-off, our business needed to update our name and logo in a short time period. I was familiar with David’s work, but not sure if he could work with our time frame. To my delight, David accepted the project and quickly completed a fantastic design. We feel he understood our goals and created a great logo we can use for a long, long time. Kudos.

It was a pleasure working with Garrick, and I wish the VISSUMO team every success for the future.

Hewlett Packard set a design brief for the recent D&AD Student Awards, and one result in particular stands out.

Brief:
Present an idea which promotes HP Workstations ability to bring to life anything the creative mind can conceive.

Response:
Focusing on the synchronisation of a range of HP products, printers become an orchestra in an aesthetic symphony conducted by HP Workstations.

HP - invent from Tom and Matt on Vimeo.

Filmed, edited and directed by Matt Robinson and Tom Wrigglesworth.

The two designers are recent graduates from the Design Communication degree course at Kingston University, London, and they’re currently looking for experience within the creative industry.

Good luck in your search, guys. Love the video.

Henri Ehrhart is a French wine producer in the Alsace region. Cyrille Ehrhart asked if I would redesign their corporate identity, and it was a pleasure to do so. Here’s an insight of the logo design process.

The company has been operating for more than 50 years, and is focused on standard and medium range wines (mainly distributed in supermarkets). It sold 4,500,000 bottles last year.

“We are a young and dynamic company but with a strong historical past. (today we are the 7th winemaker generation) a brand who is accessible and reflects a product of high quality.”

The previous heraldic logo is too detailed to work across a wide range of applications. The serif type offers a traditional feel, but the crest-like symbol won’t work efficiently at small sizes without the loss of detail.

I researched topics including the Alsace history, wine production techniques, the notion of terroir and Henri Ehrhart’s competition.

I presented ideas relating to the Alsace region, such as crowns from the Alsatian flag, and the stork — part of Alsatian scenery for many centuries. The initial designs were deemed unsuitable, and after clarification a number of new concepts were drafted (some shown below).

Leaves signify growth, the vine, and the rolling hills of the Alsace region. The pattern is arranged to mimic the rising sun along with the high amount of sunshine symbolic with the Alsatian vineyards. The curve subtly represents the form of the grape, while the repeating pattern offers a sense of continuity, suggesting the 50+ years tradition of the company.

A single leaf icon can be used as a separate design element for a variety of purposes e.g. website favicon, embroidered motif, pin badges etc.

Client feedback stipulated the need for a simpler, less aggressive design, favouring the creation of a monogram.

The “HE” in the above monogram represents a wine glass and bottle.

The smooth, flowing lines relate to the young, dynamic brand of Henri Ehrhart, with the traditional typeface keeping a level of heritage.

When the mark is used in isolation (without the name) it clearly tells a relevant story, although client feedback ultimately ruled it out.

“It is more important to express the origin of the wine (soil, vineyard, grapes, vine stock, leaf, vine shoot) rather than represent the objects we use to taste the wine (glass, corkscrew, bottle).”

The revised “HE” monogram is formed using a hand-written script (my personal hand-writing) to offer a unique, more flowing and natural outcome than shown previously. The curves symbolise the vine shoots from which Ehrhart grapes are grown, as well as the hills of the Alsace region and the roundness of the grapes hanging from the vines.

It works equally well when reversed, and one of the final steps in the process was to send a PDF with various colour options (link downloads a small PDF file I sent to Cyrille).

The new identity is more adaptable than the previous heraldic crest. Picture it appearing online as an animated signature, or as a stamped seal of approval on boxes of wine being shipped overseas.

In total, I created six different logo options (with some variations around each idea), and the timeframe from initial contact to supply of final artwork was approximately six months.

We were looking for a logo with a touch of modernism. David grasped our needs and produced a stunning design. When feedback was needed, new versions of the logo or any modifications were made very quickly. We really appreciated David’s flexibility and efficiency. It’s great to work with someone so open-minded and responsive. Thank you!