Internet access is still considered a rare privilege in some developing countries of Latin America. However, the lack of available technology is nowadays often mistaken for a failure in education or cultural activity. If children are days away from internet access, their education faces major obstacles. 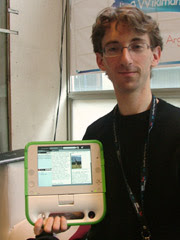 Samuel Klein with an 'XO' laptop viewing Wikipedia.
But surprisingly enough, many developing countries in Latin America are known to have maintained an optimal level of education in primary schools. With scarce resources, the educational system has managed to face technological flaws creatively. For instance, take what rural Peruvian schools are doing with an offline version of Wikipedia.

One of the main features of Wikipedia is that it's "alive." It's constantly growing and improving its content with the help of thousands of online volunteers from around the world. So does it even make any sense at all to imagine an offline version of Wikipedia? According to Samuel Klein, one of the speakers at the fifth-annual Wikimania event held last week in Buenos Aires, it definitely does.

Mr. Klein is an activist for universal access to knowledge. He's director of content and head of community development for One Laptop per Child. The nonprofit organization distributes special low-power notebooks to children in developing countries.

One of the countries that has joined the OLPC initiative is Peru. There are 55,000 children in rural Peruvian primary schools who use solar-powered XO laptops, which cost about $200 each. Since these children live from three to six days away from internet access, computers include an offline version of Wikipedia. Children can access a great portion of the Wiki encyclopedia, which works as a digital library.

The Wikipedia content lives inside the laptops' memory using software that's been specifically designed for them. Kids are able to distinguish between two different kinds of links -- blue and green -- that indicate whether the content is or isn't available offline.

Uruguay is another South American country that is working with the OLPC program. In fact, it was the first one to participate in the region where the government adopted the program as part of its national politics, known as the "Ceibal Plan." About 315,000 Uruguayan children are using the laptops now. Brazil, Paraguay, Mexico and Colombia are other examples of countries where this initiative is working successfully.

Mr. Klein said most of the truly offline schools get updates every semester or two, and they get new software of all kinds after about a year. When they get new software, they also receive new activities and updates from Wikipedia. Mr. Klein said the program is supported by a number of technology and media groups, not by brands. Governments buy the laptops, and some of the costs are covered by sponsors, which include companies such as Google and News Corp.

Email ThisBlogThis!Share to TwitterShare to FacebookShare to Pinterest
Labels: Wikipedia