It’s quite difficult to get excited about paint – hence the English expression that describes a boring pastime as “Like watching paint dry”.

Brazilian paint brand Coral (known as Dulux in most parts of the world) wanted to promote its premium decoration line, “Decora” and encourage people to be experimental with the colour of their walls at home. Traditionally, paint brands sell small quantities of paint as colour samplers, so that people can apply small swatches on their walls to compare different potential colour schemes.

However, it is hard to envisage the effect of an entirely new wall colour from a foot-wide square patch of paint. Coral therefore created a range of light bulbs in Coral colours, which when illuminated and pointed towards a white wall would show people what their room would look like if painted in that colour. These were packaged up to look like mini paint tins and distributed and demonstrated in various shops. 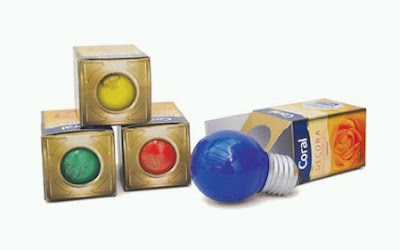 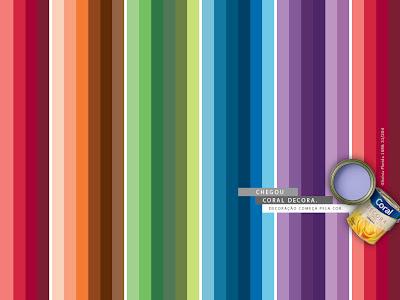 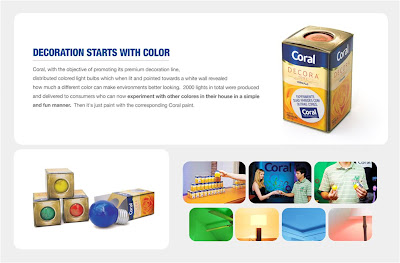 "Here we see a humble promotional giveaway creating a really valuable consumer experience which truly highlights the benefits of the product in a way that doesn't require consumers to get their hands and clothes messy."

Royal Mail was a company dangerously close to becoming unnecessary. Liberalisation of the monopoly markets meant it had new competitors able to provide customers discounts that it was barred from offering, whilst email and online activity had become the far more popular means of written communication than posting a letter.

However, another significant aspect of Royal Mail business is the assistance it gives to SME owners (Small Medium Enterprise), helping them to grow their companies. Although SME owners are the most receptive target audience to growth messages, as they have a personal commitment to their business, they are also the most difficult to engage with for that very same reason.

To generate publicity, Royal Mail ran an extensive TV ad campaign designed to shift attitudes about what its brand stood for. The TV ads directed people to royalmail.com where they could answer questions and generate a bespoke growth print, including case studies and product recommendations. To further promote the service, Royal Mail integrated its brand with MSN Office space, distributing content through special reports and channels within Growth Business and Fresh Business Thinking.

It also sponsored The Sunday Times’ Fast Track – an annual league table of the UK’s Fastest Growing Private Companies – and their Best Customer Service category. In addition, Royal Mail created a ‘Helping Hands’ channel within The Guardian online, a bespoke area containing case studies and commissioned content in the form of Q&As with business luminaries.

Overall, appeal for the Royal Mail brand has grown from 38% to 55%. SME owners claiming that Royal Mail is ‘providing new information’ grew from 20-47%, ‘better than other suppliers’ from 26-37% and ‘can help businesses grow’ 36-41%. There have been 216,000 visits to the website and, just 5 months into an 18 month campaign, revenue in the sales pipeline is already in excess of the media investment to date. 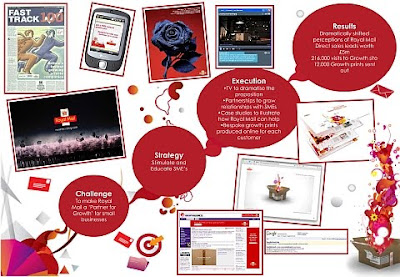 Nortel wanted to expand as an organisation but found its core telecoms business was shrinking. Determined to achieve growth it decided to instead focus its efforts on the entertainment networking sector, dominated by Cisco Systems.

With a 74% market share - in comparison to Nortel’s 4% - and an ad spend several times larger than any of its competitors, Cisco could out-manoeuvre and out-muscle the competition. Cisco’s key strategy was to ‘rip and replace’ companies’ existing systems, thereby providing an easy all-in-one solution for the busy decision-makers responsible for the purchase. Nortel discovered, however, that Cisco’s all-in-one solution was ‘energy expensive’, costing considerably more to run than its own offering, and creating a larger carbon footprint.

Its launch took place in the form of side-by-side comparisons at tradeshow Interop, where energy consumption meters were used on both Nortel and Cisco switches. Nortel’s product advantage was accentuated by the strategic placement of Nortel’s booth right next to Cisco’s. Print and TV ads asked provocative questions such as: “How much is your network costing you?” But rather than drive people to a website, consumers were encouraged to enter ‘Cisco Energy Tax’ into search engines. Optimised results would bring up a raft of blogs, IT Papers and Videos discussing the issue. An online energy efficiency calculator allowed IT staff everywhere to determine the potential cost savings of Nortel over Cisco.

The results of the campaign were emphatic. A $2 million order for Cisco was pulled and instead invested with Nortel – and this became the trend rather than an anomaly. The campaign resulted in a 46% in sales, over three times the stated goal of 15%, taking Nortel’s baseline from $722,000,000 to $1,055,000,000. 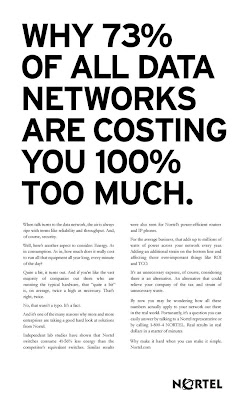 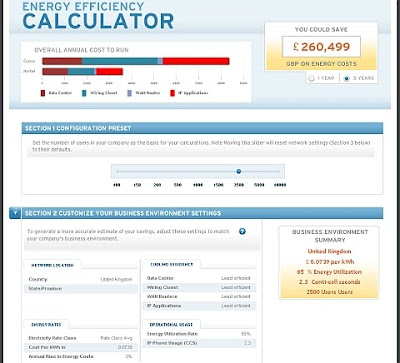 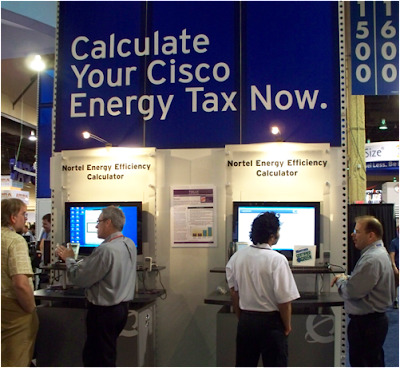