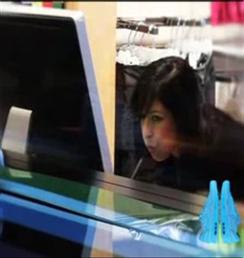 
If someone told you to blow into your computer’s microphone to make a shoe fly in Buenos Aires, you’d either think they’d been drinking heavily, or had fallen for some new internet hoax. However, Nike’s latest in-store promotion in Argentina requires visitors to do just that, and take part in the Nike Air Show.
Without wanting to spoil the magic, Nike has used microphones, magnets and a little bit of internet magic to promote the Nike Air identity in a very literal sense.
at October 11, 2010 No comments:

Email ThisBlogThis!Share to TwitterShare to FacebookShare to Pinterest
Labels: Fashion and apparel, NIKE

JDate Israel|Someone to zip you up

JDates's stroke of genius was to team up with a popular women's fashion chain, and promote their services in a fun, useful way that afforded customers a level of discretion in a potentially sensitive area. 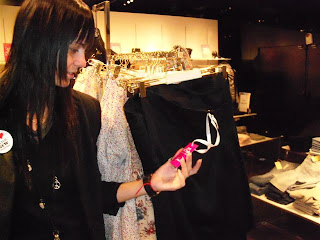 Valentine's days are the perfect time of year for dating sites to advertise for subscribers to their services.  In Israel, the Jewish equivalent of Valentine's day (called "Tu B'av") occurs in July, which coincides with the end of season sales period for retailers.
JDate, a local dating agency decided to take advantage of the fact that the sales period means increased traffic in stores, and so teamed up with clothing chain Mango in an inventive in-store promotion partnership.
Like all the best ideas, JDate's idea was simple: To provide assistance in the one area that Israeli women still needed help - zipping up the backs of their dresses. JDate provided this assistance with the use of specially branded tags which acted as a coupon for a free one month subscription to the dating site. The tags helped single women zip up the clothes they tried on - meaning that JDate could help single women find a date, and an outfit. The tags were removable, in case customers decided they already had the perfect outfit.
The activity ran for the two weeks immediately prior to Tu B'av, and more than 300,000 Mango customers were exposed to the campaign nationally. 2,000 tags were taken by customers and JDate saw traffic for this period increase by 13%, with new subscriptions increasing by 15% - a new high for the summer period.
The activity was also covered heavily in fashion magazines, blogs and social media networks. 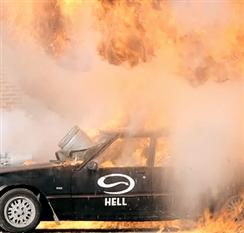 Pizza and zombies - not a combination that immediately leaps to mind, but then Hell Pizza is not a company that adheres to the conventions of its category.
Recognising that consumers spent more money online, Hell Pizza have wisely created strong content to pull customers into that environment. Adding vouchers to the end of the video journey was a brilliant way to link video activity to sales.
Brand names in the pizza delivery sector tend to be fairly uninspiring. Outside of the big brand names like Dominos and Pizza Hut, most cities around the world are home to at least one pizza delivery firm with a vaguely Italian sounding name. Hell pizza had already marked itself out from the crowd with its unusual name, but when it came to engaging its consumers it still needed something different.
Most food delivery companies focus on their products. TV and online activity tends to be little more than another expression of the outlet's menu, but Hell Pizza recognised that online orders tickets were on average 30% more than telephone orders  - so devised a purely online strategy to shift consumers from their phone to their laptop.
What separated Hell Pizza's viral video was the interactive element. In "Deliver Me to Hell", viewers watched as the brave Steve attempted to cross a city full of zombies to deliver his pizza. At the end of each clip, viewers were given a choice of what should happen next, sometimes sending Steve and his consignment of pizza margaritas to a gruesome end. 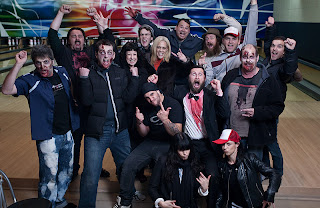 Anyone who could successfully direct Steve safely through the zombies received a voucher for free bottles of Coke, and they were entered into a draw to win a year's supply of free pizza - powerful incentive to complete the mission!
"The first point of the campaign was to make a wicked innovative adventure online that had never been done before, and the second was to drive sales", said a Hell director Stu McMullin. "Hell Pizza has always been a tech forerunner and we employed good local kiwi talent and directors. In NZ we are one of the largest online companies.  We average 22% online for total pizza sales and 35% of that is in town centers. Our web average ticket is 30% more in value - so we are all about getting customers online."
Since the campaign started Hell have seen a strong spike in sales online and of those people that were ordering and using the free coke vouchers, 43% were new customers.

Two anonymous French students in their 20s recently donned niqābs and short shorts and strolled through the streets of Paris, making sure to hit several government ministry buildings. The women, one of whom is Muslim, call themselves "Niqabitches."
"We were not looking to attack or degrade the image of Muslim fundamentalists – each to their own – but rather to question politicians who voted for this law that we consider clearly unconstitutional," they said. "We want to de-dramatise the situation."
On the news Web site, rue89, the women, students in their 20s, write, “We asked ourselves: ‘How would the authorities react when faced with women wearing a burka and mini-shorts?’”
The French senate passed the law last month. It is due to go into effect early next year. A woman who chooses to defy the ban will receive a fine of 150 euros (£125) or a course of citizenship lessons, according to the Telegraph. A man who forces a woman to go veiled will be fined 30,000 euros and serve a jail term.