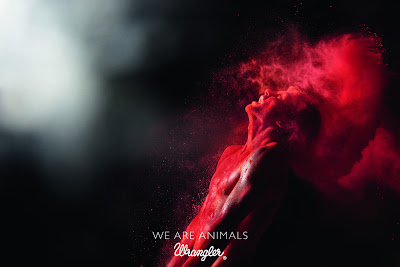 Wrangler has revealed its new image for this 2010 Spring/Summer season, which goes by the name of Red. A powerful, visceral campaign centred on the human being's most primary instincts. Men and women have been photographed in red waters or amidst the fury of twirling red dust. A new approach to the concept We Are Animals by a fit, strengthened Wrangler.

The campaign We Are Animals comes packed with emotions. Each image is a high dose of adrenalin, tension and passion, with red as the basic colour. Each character becomes the personification of the inner strength of an unleashed man, a sweeping animal alter ego.

The new campaign features two distinct phases, the first one to be shown at Berlin's Bread&Butter, with an important presence in the city and in the specialized press on the occasion of the fair. In March, there comes the second assault, aimed at the public through several channels –graphic, street ads, digital, and stores.

You can watch this sexy video uncensored here: http://www.peta.org/feat/stateoftheunion10/?c=psotum10


The third annual State of Union Undress today on PETA.org, exactly one week before President Obama's official address to the nation. In this arousing video, a sexy vegetarian PETA member performs a sultry striptease in front of an American flag while exposing the naked truth behind PETA's victories for animals in 2009.


Marissa Lewis, the striking activist featured in this video, says "While the deficit goes up, our fight for animals goes on … and when necessary, our shirts come off." Marissa proceeds to remove her blouse amid wild applause from some famous U.S. politicians. But that's not all! She also removes her stockings, skirt, and finally her underwear while she details some of PETA's achievements from the past year.
at January 22, 2010 No comments:

Email ThisBlogThis!Share to TwitterShare to FacebookShare to Pinterest
Labels: PSA

Adidas Originals is kicking off 2010 by welcoming you to the neighborhood, the street where originality comes to life as artists, athletes, and celebs celebrate their style. Everyone’s invited to our street corner along with some special guests, who traveled from a galaxy far, far away to launch a year’s worth of celebrations.

Star Wars and adidas Originals have officially joined forces in our most colossal collaboration to date, bringing you a striking collection of sneakers and apparel inspired by the characters and crafts you’ve followed for a lifetime.

The most iconic moments and beloved figures from the Star Wars saga are translated to the streets, telling their creative story across a forceful collection of adidas Originals footwear and apparel.

Celebrate this powerful alliance to the beat of a new and improved remix of the Imperial March, as Vader and the Stormtroopers land on our street corner greeted by Snoop Dogg, David Beckham, Calle 13, DJ Neil Armstrong and Daft Punk representing their originality. No matter which side of the Force you’re on, believe the hype, this year is going to be massive.

Together adidas Originals and Star Wars “Celebrate Originality” at its very best and provide stylish products for everyone, from true collectors to more youthful lifestyle consumers in 2010.