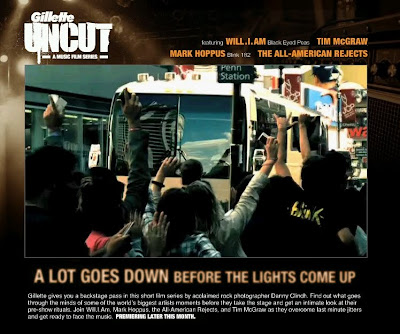 Gillette goes for rock'n'roll imagery in latest celebrity fronted campaign.
Possibly in a move to counteract recent scandals involving members of their usual stable of clean-cut celebrity spokesmen, Gillette target the under 30s male grooming market with a series of music films featuring artists from the worlds of rock, punk and hip-hop.
Building on the idea that a man's grooming routine helps prepare him to take on the world and face any challenges with confidence, the campaign draws analogy with the preparations made by rock stars before they perform in front of an audience. Steve Fund, director of global marketing, promises that the films will “show a side of the artist that's rarely, if ever, seen – going backstage to show how they prepare, including styling and grooming, and the moments of doubt they experience before taking the stage.”
Greenlight Media & Marketing engaged the services of renowned photographer Danny Clinch, former protégé of Annie Leibovitz and a prolific director of live concert films. Clinch's short film, and the affiliated print campaign, features the All American Rejects, will.I.am of the Black Eyed Peas, Tim McGraw and Mark Hoppus from Blink-182 in their pre-show rituals. After a premiere in L.A, the campaign is set to air on the Fuse television network.
As a supplement to the Uncut launch, the Gillette website will also feature a series of light-hearted video tutorials, also featuring the musicians, where viewers can learn to “Shave Like a Rock Star”.