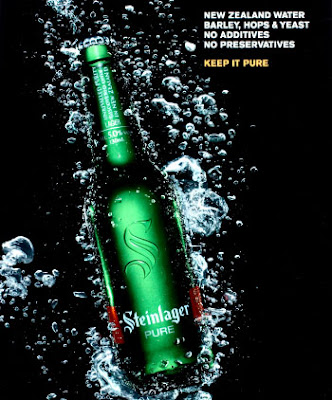 Category: New Product or Service Introduction
Agency: Publicis Mojo
Advertiser: Lion Nathan
Campaign: Steinlager Pure – Keep it Pure
SUMMARY
Steinlager was New Zealand's number one premium brand, but with Heineken and a multitude of other European brands entering the market, its position had deteriorated.
The agency uncovered a number of issues that were holding Steinlager back; it was clear that more than a new advertising campaign would be required. Extensive consumer research conducted by the agency provided a positioning for a new brand based around Purity. A beer of uncompromising purity with an attitude to match. An iconic campaign featuring Harvey Keitel bought the positioning to life. The result; a campaign that redefined the premium category, exceeded every benchmark set, and helped Steinlager Pure take a 3.3% share of the total beer category in its first year.
This campaign also won Publicis Mojo a Gold EFFIE for New Product or Service Introduction and a silver for Return on Investment.

MARKETING CHALLENGE
Steinlager had baggage including urban myths about chemicals and hangovers, an aging drinker image, a poor social image and an unclear product positioning.
The agency and client together reached the conclusion that no matter how great, or inspiring a piece of communication produced, it wasn't going to overcome all of these barriers. The issue was confronted head on with a new beer.
CAMPAIGN OBJECTIVES
1. Business Objectives
Create a new product that would:
a) Achieve 1% volume sales of the total beer category. (This objective was based on analysis of other premium beer launches.)
b) Achieve and maintain a price premium over European beers (in particular Heineken)
(“Steinlager sells at $20 for a 15 pack, you could never charge $25 for a dozen” – Trade customer)
c)Provide a platform to return the Steinlager brand back to leadership of the premium beer category within three years
Measured by total Steinlager sales (e.g. Existing Steinlager + new Steinlager)
d) To do this with minimal cannibalisation of the existing Steinlager brand
2. Marketing & Communications Objectives
a. Build a base of adorers
Lion measure loyalty by using an adoration scale. The ultimate is to be an 'Adorer' defined as 'This is the only brand I drink' or 'Almost always the first brand I consider, but also drink others'.
The benchmark Lion aims for is 8% across all brands – it was expected a new brand would take two years to achieve this.
b. Communicate that the new Steinlager is;

TARGET AUDIENCE
New Zealanders with a hunger for a bright, vibrant and ambitious future.
25 to 35 years, primarily male.
CREATIVE STRATEGY
The creative needed to communicate why Steinlager Pure is different and why it's worth paying more for.
The answer lies in the combination of the rational (the purity / NZ ingredients story) and the emotional (a pure / uncompromising approach to life). From the bottle to the advertising, the purity message was supreme. The uncompromising approach and Steinlager's international status were realised in the Harvey Keitel TVC which perfectly balanced the rational and emotional message.
OTHER COMMUNICATION PROGRAMMES
Public Relations, Point of Sale
MEDIA STRATEGY
The media strategy incorporated television, metrolights and magazines to provided a high profile launch without compromising the important premium brand credentials, reaching premium drinkers at home and at play with a distinctive and engaging presence.

Steinlager trademark has equalled the volume share in supermarkets of Heineken in two of the last three quarters due to the launch of Steinlager Pure. Note that there is no cannibalisation of Steinlager Classic.

NB. Supermarket data is used as this is the only channel where Lion & Heineken comparative data is available.
Source: Lion Nathan / Nielsen