Apple iPad: What is iPad

It's sick and sad video chat site...is a NEW social network.Not the old concepts — no name, place, likes or dislikes. Nothing to buy. Nothing but encounters. Funny, but totally useless..NOT for the faint of heart.. 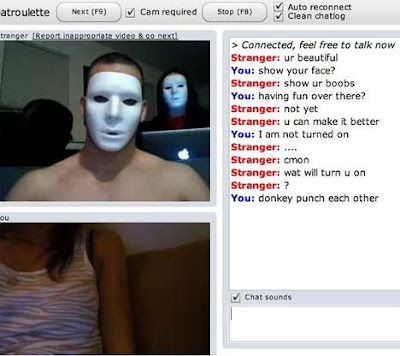 If someone doesn’t strike your fancy, F9 him and move on.
In this part of the world we grow- digitally- with similar concepts wiped and outperformed by facebook. Chat channels and forums were the buzz those times for you to hide and be whom ever you want to , express the most extreme ideas and live your wild fancies in a random manner.
A website created by a Russian teenager allowing random strangers to talk face to face via webcam has attracted worldwide attention, It is a new social medium and an opportunity to stumble into strangers peer randomly and accidently but first you will need to ignore most other users until you find someone you find interesting or compelling.
Chatroulette, which was created in November last year by 17 year old Andrey Ternovskiy, has been described by some observers as voyeuristic,frightening, and surreal. however it is amazing how quickly it caught on: it’s leaped from 300 users in December to over 20,000 per day. The creator literally funds all expenses for the site with four tiny ad links.

9 Ways to Market Your Business Via Chat Roulette


Chat Roulette is a service that allows users with webcams to randomly chat with each other under the protection of anonymity. If a user doesn’t like the person they’re chatting with, he or she can click the “next” button and immediately sync with someone else. Those who use the service know that with each press of this button brings a new surprise. People dressed in costumes, puppets, talking, sexual-act performing deviants and masked-chatters can all be found among the regular chat community, making the experience unpredictable and exciting. Aside from chatting with random people, Chat Roulette can also be used to promote your business, because any service that provides free access to tens of thousands of people can be used to your advantage. And, with a little creativity you can use Chat Roulette to spread your message to anyone willing to listen. Here are some suggested angles:

(s0urce)
This may not be the most responsive marketing strategy for your business, but there are several good reasons to give it a shot. If you are hanging out on ChatRoulette, you probably aren’t doing anything extremely productive at the moment, so any amount of exposure you can give your company is valuable. A simple, boring tee-shirt with your corporate logo on it won’t work however, Chat Roulette users are used to seeing some pretty surprising things from other users. Instead, try to make your company’s shirt funny, sexy, outlandish and/or attention-grabbing so that your chat buddies will ask about it. This is a great way to give a quick plug for your company before trading off to the next chat partner.

(source)
It isn’t easy to shock seasoned Chat Roulette users. Anyone who has spent more than an hour on the service knows that there are some odd characters using this service. In a way, this is part of the excitement, and many have come to expect shocking content to manifest in the partner cam. If you are trying to spread the word about your new company, try a shock-value approach on Chat Roulette. Note: Use some discretion. Dressing in a costume (such as a giant cow) or doing other non-perverted, offbeat things can entice users to strike up a conversation with you. Just think about the guy that was got all of that attention for his piano-freestylin’ earlier this week. Just think about what a golden opportunity that was to promote a brand.

(source)
While shock value is definitely a big part of the Chat Roulette experience, some users aren’t interested in overt nudity or demon-robot masks. Instead, some chatters just feel like connecting with someone interesting. If creating humorous and surprising scenes on your end of the webcam isn’t something you’re very comfortable doing, perhaps try simply chatting with people about normal stuff. Once you have established a good back-and-forth conversation, casually bring up your company and explain what it is you offer. You wouldn’t walk into a networking event wearing your ComiCon get-up, so maybe the ‘regular guy’ approach could work here too. The fact of the matter is that people like doing business with people that they like, so this approach cannot be altogether ignored.

(source)
It’s safe to say that most people on Chat Roulette are bored and just looking for a way to pass the time (or to expose express themselves). I’m thinking that most users would welcome the opportunity to do something more exciting. A great way to spread awareness of your company is to offer an incentive for Chat Rouletters to visit your company’s website. As an example, set up a system where every person who goes to your site and fills out a brief survey or offer page gets entered into a raffle to win a nice prize at the end of the week. Arguably, many people on Chat Roulette would rather spend five minutes on your website in hopes of winning a laptop than chatting with another random stranger. And if it works, you’ve just untapped an interesting new source of lead gen.

Run A Still Ad All Day

(source)
Thought about display advertising, but just haven’t found the budget for it yet? Well, Chat Roulette does not require that you be in front of your webcam, only that your webcam be enabled. If you have a spare computer at home or in the office, you can use Chat Roulette as a 24/7 advertising platform. While, most people might simply ‘next’ your ad, I’d venture to say that some would be curious to see what the advertised website is all about. Because, if curiosity killed the cat, you can consider Chat Roulette a pet cemetery.
So if you have some downtime, try creating a promotional poster and position it in front of the spare computer’s webcam so that it takes up the entire frame. Then simply connect to Chat Roulette and walk away. All day and night, people will be randomly  be forced to look at your cam (if only for a second), and your advertisement will be shown. The more humorous or shocking you can make your ad, the better chance it has of making an impact. Be sure to include a website URL at the bottom. And, if you operate an e-commerce site, for example, don’t be afraid to throw a coupon code on there so you can track conversions.

(source)
Using a method similar to that mentioned above, you can use the Chat Roulette system to offer free trials to any interested chatters. Perhaps your company offers a paid Internet service, such as file hosting or music downloads. Simply develop a free trial registration code and print it nice and big on a promotional poster. Next, focus the webcam on the poster and connect. There’s no telling how many people will be connected at random to your camera, but just as with the coupon code idea mentioned above,  you will be able to measure how successful this is, based on how many people sign up. Remember, people like free things.

(source)
Chat Roulette provides sales people with a whole new way to look at sales. Each webcam is like a new door to knock on, and with tens of thousands of people using the service at any given time, your sales team has a large audience to work with. Allow your salesmen liberal creative license, as Chat Roulette marketing probably will not merit a simple sales script. It’s also a good idea to brief them about the type of people they can expect to encounter on the site. For those who believe in ‘baptism by fire’ you can ignore this step, but don’t be surprised by a high turnover rate.
Ultimately, your sales people should aim to connect with as many webcams as possible and get users interested in what your company has to offer. Due to the nature of Chat Roulette, this method might work best with services such as online dating, Internet gaming software and social networking – but don’t let us stop you from trying other things.

Be Vague And Intriguing

(source)
Sometimes vague and mysterious messages attract curious attention. The marketing behind The Matrix illustrates this point beautifully. When the movie was released in 1999, most commercials and billboard ads revealed very little of the actual movie, choosing instead to show green numbers flying over a black background and asking the question, “What is the Matrix?” These ads helped sell out theaters nationwide, as people were dying to learn just what The Matrix was all about. You can use a similar strategy with Chat Roulette. Rather than sitting in front of your camera and talking to people, try filming something very strange and thought provoking, and playing it on repeat in front of your webcam. Include your website URL, but do not reveal too much . This strategy will likely attract people looking to learn more about what they have just witnessed. If nothing else, it might serve as a nice break from their having to quickly hit the ‘next’ button.

(source)
Chat Roulette allows the user to turn his or her webcam off and broadcast only audio. Try recording an audio advertisement for your company and broadcasting it on repeat over the service. If you want, you can even try hypnotizing people. It’s really up to you. These ads shouldn’t sound like normal radio-style commercials, however. In order to arouse the interest of users, you will need to couch your ad in something funny or interesting to listen to. Try using music or acting to attract viewers attention. And if all fails, just start yelling and act crazy — then try to pitch them on your products or services.

Here we have a campaign that I think makes excellent use of Chatroulette as a medium to get a message across. In this video we see how Chatroulette is used to inform people about the risk of HIV.
What does ViralTracker tell us?

The video has been uploaded on YouTube op April 28 with courtesy of the Condomerie in Amsterdam. In comparison to Evian or Will It Blend this video is not skyrocketing at all with 965 views.
======