10) One of the most successful taglines for Kentucky Fried Chicken was “finger lickin’ good”. The trouble is, when translated into Mandarin (or is it Cantonese?) it becomes “eat your fingers off”.

9) When UK telecom company Orange launched their tagline “the future’s bright, the future’s Orange” Catholics in Northern Ireland were angry because the term “orange” is associated with Protestantism.

8)The Mitsubishi Pajero won a number of awards around the world for being so robust. For brand consistency reasons, they wanted to use the name in every country. Unfortunately they didn’t do enough research in Spain and after the launch had to change the name because in Spain, Pajero means ‘wanker’. (In the UK a wanker is someone who masturbates).

7) Spain gets another mention for another failed automotive branding story. This one revolves around Chevrolet. Some time ago Chevrolet decided to introduce the Nova to the Spanish market. Sales were poor, why? Because in Spanish Nova means ‘no-go.’

6) No brand mistakes article would be complete without a contribution from Pepsi. My favourite one is the “come alive with the Pepsi generation” slogan, which in Taiwan is “Pepsi will bring your ancestors back from the dead”.

5) And if we mention Pepsi, it’s only fair that we mention Coke. About 5 years ago, Coke wanted to break into the bottled water business. The name chosen was Dasani. OK so far. Coke announced that its “highly sophisticated purification process” was based on Nasa spacecraft technology. Soon after it was discovered to be a reverse osmosis process used in off the shelf domestic water purification tools. To make things even worse, just as the project was about to launch, it was discovered that the UK supply was contaminated with bromate, a chemical better known for causing cancer.

3) As personal branding seems to be getting a lot of ink at the moment, one of my favourite gaffs was the one about Lee Ryan (of Blue fame) who gave an interview just after 9/11. During the interview he was quoted as saying, ‘What about whales? They are ignoring animals that are more important. Animals need saving and that’s more important. This New York thing is being blown out of proportion.’ Many industry insiders consider these comments to be the reason for the demise of Blue.

1) One of the greatest naming disasters of all time must be the attempt by Dragon Brands to change the Royal Mail of the UK from a 300 year old domestic mail only (government) institution to a multi dimensional distribution company. Dragon Brands did a lot of internal and external research over a two year period and then assessed the aims of the brand using measures that included ‘the three p’s’ – personality, physique and presentation.

Next they took three circular like shapes and filled them with words such as ‘scope’ and ‘ambition’ and apparently (I’m not making this up) this brought together ‘the hard and the soft aspects of the brand’s desired positioning.’

This remarkable process threw up hundreds of actual words as well as some that were made up. Apparently the brain storming team favoured Consignia because it included consign and the dictionary definition of consign is ‘to entrust to the care of’.

The cost of the new name was £2 million. It lasted approximately 18 months. 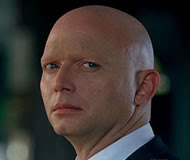 To promote its new show Fringe, Fox Television is playing an interesting game with its viewers, likened to Where’s Waldo. A mysterious character from Fringe called The Observer is now appearing in a variety of live events on the channel and is meant to get people watching more of Fox’s programming – trying to spot him creeping around. At the live events, he’s on-camera but goes completely unmentioned by hosts and commentators. Pretty interesting idea