Absolut Rock Edition | In An ABSOLUT World You're With The Band

The newest special edition release from Absolut: "IN AN ABSOLUT WORLD, you're with the band. To pay tribute to rock-and-roll — ABSOLUT is launching a limited edition bottle wrapped in a leather- and studs gift pack." Absolut collaborated with designer Natalia Brilli to create the leather and studded design.

ABSOLUT VODKA presents a creative collaboration featuring visionary photographer Danny Clinch and Wolfmother to commemorate the launch of the limited edition ABSOLUT Vodka Rock Edition Bottle. Danny followed Wolfmother for several days in Los Angeles, shooting more than 4000 photos of the band and directing this documentary of the project. See more at http://www.absolut.com/rockedition.

"Italian fashion designers have teamed with Coca Cola for fund raising campaign in support of the victims of the earthquake in Abruzzo, Italy.

These famous fashion designers have dressed with fantasy and colors Coca-Cola light’s bottle and have sold them at auction during the “Tribute to Fashion” show in Milan. Eight fashion designers, only women, have done a great work with Coca Cola bottle, because every packaging has a strong personality and represent very well brand values as happiness or joy of life, of course always in a chic and exclusive way." 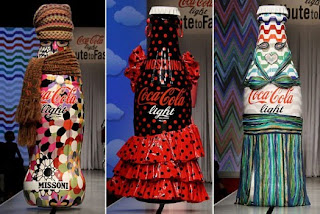 Coke Light has always lived in the shadow of its more glamorous sibling, so the Coca Cola company thought it was about time to let its Coke Light bottles have their time in the spotlight. Coke Light’s ‘Tribute to Fashion’ saw the bottles given a celebrity makeover in an event that also raised money for the victims of last year’s earthquake in Abruzzo, Italy.

Over 250 people died in the 2008 Abruzzo earthquake and many more were injured. Tribute to Fashion is not the first time Coke has raised money for charitable causes. Its philanthropic arm – the Coca Cola Foundation – donated over $82 million to various causes around the world including environmental, community based and educational projects.

For the Coke Light fashion show, a range of internationally recognised Italian fashion designers such as Moschino, Marni, Fendi and Versace were enlisted. Each created a life-size Coke Light bottle outfit for display on the catwalk in Milan, with their designs also being used as labels on actual Coke Light bottles. 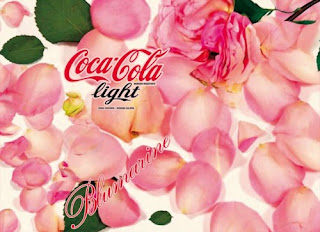 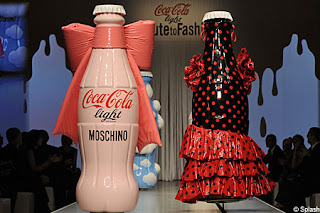 The bottles went on sale in Milan on the 25thSeptember, with all profits from the sale of the limited edition bottles going towards funding scholarships for young women affected by the earthquake.