WHEEL OF CONCEPT: A NEW SPIN ON INSPIRATION

When the client presentation is an hour away and you need impactful ideas immediately, look no further than the Wheel of Concept. This digital tool serves up pre-packaged client-focused cutting-edge ideas, taking inspirational pressure off overworked creatives. Simply go to wheelofconcept.com, enter your client’s brand name and spin the wheel. Your concept will be branded with your client’s logo for you on a ready-to-print PDF presentation board. Making your client happy 100% of the time has never been easier. Now with the new Wheel of Concept, thinking is one less think you have to think about.
Credits:
Creative Director: Saman Rahmanian
Account Director: Joshua Lenze
Copywriter: Hunter Simms
Art Director: Sherina Florence
Sound Design: Antony Demekhin
Programming: Andronicus Riyono
Voice Talent: Steve Brauntuch

Bike theft is an everyday occurrence in cities. As a cyclist, having your bike stolen is obviously inconvenient, but then so is the amount of locks, chains and tools that you have to carry around with you everywhere in attempt to keep your ride secure. 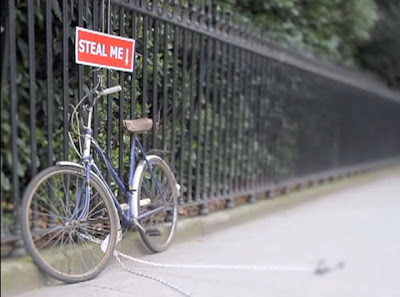 Owners of second-hand bikes never really escape the nagging sensation that the bike they've just bought through Gumtree or Craigslist wasn't already stolen, and no amount of local police force initiatives ever seem to fully address the problem of bike theft.
As a security device, the Lock-Off bike lock from Cheeky.com claimed to be "near-indestructible". Cheeky.com is an online retailer that specialises in unusual but useful inventions that challenge accepted conventions of purpose and design. As such, the most noticeable feature of the Lock-Off is the unmistakable message it sends to would-be bike thieves: Lock-Off is the only bike lock to give thieves the finger.
Opportunities to demonstrate the effectiveness of a bike lock are somewhat limited in traditional media. Manufacturers can make any number of claims about the strength and effectiveness of their product, but to the cyclist who has had their bike stolen needs some more concrete proof that their new bike lock is the ultimate protection from thieves.
To prove just how good the Lock-Off was, agency The Social House attached a bike some railings in a part of Dublin that was notorious for bike theft. Confidence in the Lock-Off was so strong that cutting tools were also chained to the bike. A sign with the words "steal me" was the final addition to the bait. A camera was left set up to record the stunt, and the footage used in a demonstration video hosted on YouTube.

Full results to follow. Within 3 weeks of upload, the Lock-Off video had been viewed more than 8,000 times.
Demonstration videos and infomercials can often be quite boring for the viewer. Here The Social House have risked a product demonstration in a very public environment, which makes for entertaining viewing and a compelling case for the product