This innovative Pret campaign that launched in April 2016 is notable not only for its originality, but for its refreshingly creative and low-budget approach to marketing.

Using the power of consumer insights to fuel their thinking, the inventive in-house creative team conducted research that revealed a shift in consumer attitudes towards healthier foods, having seen a double digit sales increase for healthy vegetarian options in 2015.
Basing its marketing around this insight, the team launched its first standalone vegetarian pop-up shop to give their clientele exactly what they were looking for.
Relying almost exclusively on in-store advertising and social media to expand their reach, the campaign proved the power that lies in listening and responding to your audience.
Pret’s sales of vegetarian food achieved a 13.9 per cent increase in sales to reach £676.2m last year, with the campaign leading to the rollout of more permanent sites. Group Marketing Director, Mark Palmer says:.

“If customers are good enough to give you their time, you need to listen.”

“Marketers find it hard to listen, they usually have their minds already made up. That is a mistake because if customers want to be part of your brand, you need to take them seriously.” Coffee and food chain Pret A Manger says demand for its vegetarian products helped to lift sales last year.
Total group sales rose 13.9% to £676m in 2015, with like-for-like sales - which strip out the impact of new stores - up 7.5%.
Underlying earnings at the chain rose 14.4% to £84.2m.
Pret said it was continuing to adapt its menu to meet the demand for healthy options and it is planning to open a vegetarian "pop up" shop this summer.
In the UK, sales of vegetarian products showed double digit growth last year. Avocado was the ingredient that saw the biggest rise in demand.
Clive Schlee, chief executive of Pret A Manger, told the BBC: "Demand for vegetarian foods is growing faster than for meat, but meat remains an important part of the diet.
"We are encouraging vegetarianism because we want to give meat eaters more options. I think vegetarian foods could look better and be better."

The chain said coffee remained an important area of growth, with customers buying 1.5 million cups a week from its global network of shops.
It said it had seen an increase in demand for breakfast-on-the-go, with 58% of sales occurring outside lunchtime.

The US was Pret's fastest growing market last year, achieving a 13.8% increase in like-for-like sales.
Pret opened 36 new shops last year - 23 were in the UK, six in the US, four in France and three in Hong Kong.
These included locations at major transport hubs such as Penn Station in New York, Nice Airport and Gare de Lyon station in Paris.
The company said it created 763 jobs worldwide, with 500 of them in the UK.
Clive Schlee said the chancellor's National Living Wage had meant a 5% increase in the company's wage bill, but he said they were committed to paying above their competitor's rates to keep their staff fully engaged in the business.

Popular restaurant chain, Qdoba, created a campaign where their fans could vote for their favorite queso, deciding which one the company would keep and which one would have to go.
The best part about this social media campaign was that the Qdoba team updated the results in real-time, keeping everyone engaged, and building suspense around the showdown. 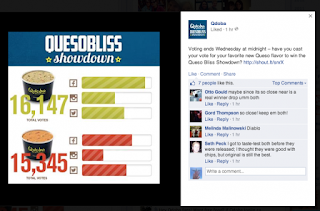 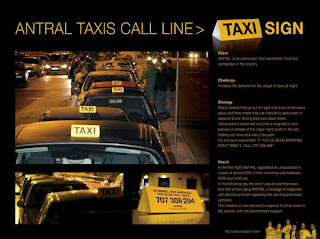 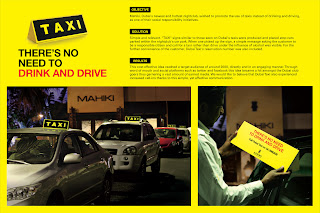 McDonalds Baby»»»I nominate this Ad for Most Outstanding Commercial


McDonalds “Baby” is one of the nominations for Most Outstanding Commercial at the Primetime Emmy Awards being held on September 18 in Los Angeles. The commercial, launched in April 2010, features a dad whose attempts to keep his baby asleep involve driving around in the car in the night. He manages to get an order into the McDonald’s Drive Through attendant, but only by circling a few times.


McDonalds in the UK is running “A to Z”, an integrated advertising campaign deisgned to reassure parents about the high quality of McDonalds food, commitment to corporate social responsibility, staff training opportunities, environmental initiatives and its commitment to their local communities. “Everything from our ingredients to our people. Discover what makes McDonald’s.” A 60 second television commercial has kids, parents and farmers interacting with each letter of the alphabet to bring to life behind-the-scenes stories. The campaign is carried over online at a-z.mcdonalds.co.uk, instore (trayliners), in print ads and on the side of McDonald’s trucks. Intricate illustrations build on the handmade feel of the TV, each depicting an individual letter and the story it represents or collecting the entire 26 stories together.

Problem: People feel guilty about eating McDonald’s food because of negative publicity around its nutritional value. Local governments have even banned McDonalds advertising targeted at children.
Insight: Healthy eaters spring for McDonalds as a guilty pleasure but are ashamed of their secret McDonalds habit. The majority of McDonalds related tweets deal with people rewarding themselves with McDonalds or feeling guilty about eating there.
Solution: Let closeted McDonalds fanatics know that they’re not alone. Have people come clean about their McDonalds habit by publicly confessing.

We created the twitter account: @McDsConfession and the hash tag #McDsConfessionFeeds for both of these handles display all the McDonalds Confessions worldwide in realtime on the website McDonaldsConfessions.com


Problems: The recession  forced commuters to cut back on coffee, breakfast and lunch from fast food franchises. What consumers don’t know is that Dunkin Donuts was founded on and helped fuel America out of The Great Depression. Most importantly, Dunkin Donuts is a quasi-bakery that doesn’t serve a bakers’ dozen.

Insight: Dunkin’s customers, hard-working Americans, pride themselves on their cliched  ”giving it 110%” work ethic.
Solution: Inspire Americans to keep giving 110% by setting a good example. Give Americans a bakers’ dozen worth of everything Dunkin Donuts sells.
To do this, we created a line of promotional Bakers’ Dozen products to be sold next to their pre-ground coffee in supermarkets and at franchise locations.
To get the word out about the promotion, we created a campaign targeting morning commuters. The target market spends a lot of time with traditional media, especially while commuting. So our campaign features: print, radio, outdoor and point of purchase poster ads to remind commuters to stop at Dunkin Donuts on the way to work.