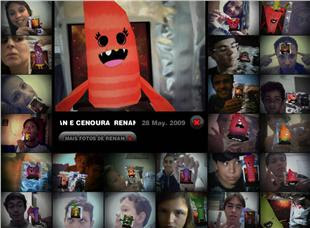 Augmented Reality and social networking have been fused together in a lovefest for Doritos Brazil. Packs of Doritos Sweet Chilli - the latest flavour - bear a QR code directing users online to ‘release’ aDoritos Lover, a sweet and unique little cartoon like monster. The campaign, created by Cubocc, Sao Paulo has seen some fantastic results so far with 23,000 lovers already being freed in a week.http://www.doritos.com.br/sweetchili/
Upon being released, the Lovers are added to their owner’s Orkutprofile - the largest social network in Brasil - as a special app. Owners can take pictures of their Lover, create birth certificates or even put the unwanted Lovers up for adoption!
The most exiting part though is that the Lovers have a mind of their own... with built in AI, Lovers will interact with others online and can randomly ‘introduce’ their owners to other Doritos Lovers owners... amazingly, there are over 18 trillion possible Doritos Lovers combinations!

This follows news this week that the hugely successful and equally love driven ‘Bring slow dancing back’ Doritos campaign created by BBDO Argentina has been awarded a Platinum Sol, the highest acclaim of the Iberoamerican Festival of Advertising Communication. BBDO’s win marks the first time in the history of the festival that an Argentinean agency has been awarded the acclaim. Look out for the campaign at this year’s Cannes festival too.
at June 02, 2009 No comments:

GM is filing for bankruptcy and guess what? They owe a ton of money to the ad industry and are probably responsible for tons of Detroit ad folk losing their jobs. Way to go, gas-guzzlers. Maybe the Hummer brand should have seemed like a bad idea sooner?

Why do you think GM collapsed? A company which was started in 1909 went on to stay well ahead in the automobile industry for 100 years collapsed. I understand it is not all of sudden. What happened to their financial management?

GM is a very interesting case. Yes, it is certainly one of the great titans of U.S. industry and it's not any fun to see them go into bankruptcy.

There have been several opinions put forward at to why this all happened:

"why did those losses happen?" the key to GM's losses has to do with sales and fixed costs..

The problem for GM was that when the sales slowed down, they had trouble cutting costs because most of their costs were fixed. In other words, a lot of their costs did not go down as their sales went down. In most manufacturing companies, when sales go down, some of the bigger costs go down as well ,GM has tremendous fixed costs related to their union contract. Closing a plant, for example, did not necessarily mean the workers lost their jobs. Company pensions and legacy health care costs were fixed as well. So when sales went down, many costs stayed fairly constant. And that led to losses.

As the losses mounted and the economy struggled, these losses became so significant that GM could not survive as a viable business. In spite of billions of dollars of government support, the only solution for GM is to declare bankruptcy and try to lower those fixed costs through a court process.

With the declaration of Chapter 11, GM is poised to enter a new era. The core of the transformation strategy is a separation of "New GM" from "Old GM." Essentially the company will be split in two with the assets of the old being sold or otherwise liquidated. So far, we know that several smaller units such as Hummer and Saturn will be disposed of, as well as one long-time GM brand — Pontiac. Up to 20 factories also will be sold or closed. More than a 1000 dealerships are likely to shut their doors.

In the auto industry the term "Job 1" is used to denote the first car of a new model that comes off the assembly line. It's a time when all the work to create the right product and the right process either comes together or doesn't.

So it seems fitting to use the idea of Job 1 as a metaphor for what the new leadership team at GM needs to get right during the transition period. What is Job 1 at GM? They need the right brand and platform architecture to drive the company forward. Because what has hobbled GM for a decade or more was an outdated architecture that was the legacy of the founding and growth of the company.

When GM was founded in 1908, it was a startup seeking to compete with a behemoth, the Ford Motor Company. Ford had changed the game in automobile manufacturing by introducing mass production techniques, notably the assembly line, supported by a fully integrated supply chain (Ford owned forests and coal mines). But Ford lacked the desire to customize its products to meet the needs of its customers, offering the Model T in, as Henry Ford famously put it, "any color as long as it's black."

Following a near collapse during the 1921 recession, GM was reorganized under CEO Alfred Sloan in 1923. Rather than meet Ford head on, Alfred Sloan and his team created a brand architecture, a five-model product line that ranged from the inexpensive Chevrolet to the premium Cadillac. Customers that bought a Chevy as their first car traded up as they became more affluent. To support this strategy, GM focused on styling and increased apparent customization through trim options that kept the core platform the same, but made the varieties built on it seem very different. (They also out-sourced much more component production to suppliers than did Ford and built dealer networks).

By the late 1920's, GM had become the dominant automaker in the US, forcing Ford to completely change the way it did business. GM became so successful that it virtually had to start competing with itself, ultimately leading to a proliferation of brands and a separation of the production networks and dealer networks for the company's various offerings.

And therein lies the heart of the problem that has laid GM low today — lack of a rational brand and platform architecture that would allow the company to compete with the likes of Toyota and Honda. The success of Toyota is founded on many factors, notably, its excellence in product design and manufacturing. But the heart of its success really rests on its simple brand architecture. You have Toyota cars for the masses, Scion for the young-and-hip, and Lexus for luxury buyers. And that's it. Toyota vehicles are built on a relatively small number of "platforms" — the chassis, suspension and drive train on which the shell is placed — that permit the company to offer a wide array of seemingly "different" vehicles. And the company pays a lot of attention to sharing parts between platforms to keep production volumes up and costs down.

The upshot? Brand and platform architecture are Job 1 for the new leadership team. Unless the New GM emerges with a simple, rational brand architecture, supported by the right approach to platform design and parts sharing, the company simply will not be able to compete with world class competitors, and we will continue to witness the decline and fall of a Giant