Visitors to “BajateunColtgratis.com” (downloadafreecolt.com) find an image of the 30 parts that have been distributed around the internet in banners on main portals (such as Spanish newspaper El Pais) as well as various peer to peer sites (including eMule, eDonkey and BitTorrent). Participants must register on the site and search for and download the various parts. 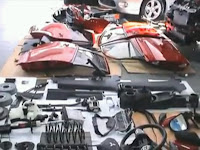 As a registered user, you only need to click on the banner with the car part and it automatically downloads to your account. Users who find more than one of the same part can swap them with other players in the exchange room created by Mitsubishi. They can also share information about how to find the parts in a forum.
A widget provides live information of what is going on in the game as well as hints and tips

The site also features a promotional video of an actual Colt being disassembled by mechanics before the parts are distributed on the web.
The game will continue to run for another week so late joiners will need to make up for lost time. The first person to collect all 30 pieces of car will win a Colt
at May 11, 2009 No comments:

Yellow Pages has launched Testimonial - a new campaign created by Clemenger BBDO Melbourne featuring real business owners who have benefited from advertising in the directory.

The TVC builds on the brand’s strategy of justifying to its advertisers that their investment in being in the directory is money well spent.

The ad features 23 real business owners from all over Australia, who advertise with Yellow Pages. No paid talent was used . They describe in their own words how they have benefited from it. They paint numbers on a large yellow canvass which relate to the results they have achieved.

"due to element of sexuality and objectification of women" 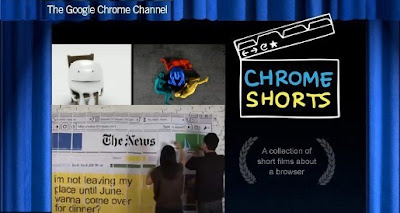 Each of the eleven films have been spliced together for an invitation to visit the Shorts site.

Chicken or Egg? A simple query takes our hero on a wild rollercoaster ride through the Internet, where chicken links to feather, feather to pillow, pillow to tooth fairy, and so on. Fasten your seatbelts. By Superfad.

What Makes A Good Browser?

What makes a good browser? And, what the the heck is a browser to begin with? This video explores these fundamental questions and provides some warm and fuzzy answers. By Christoph Niemann. Music by Kim Wetmore.

The Evolution of Simple

When everyone puts their heads together, great things happen. This film explores how the internet makes it easy to collaborate with anyone, anytime. By The Collaborative Works of Jeff & Paul.

Dr. Squirrel and his acorn helpers are hard at work at Google Labs. Hilarity ensues. By GoRobot!

One man tackles his (sky-high) pile of tasks with uninhibited fury. And the help of a powerful and mysterious new web tool. By Lifelong Friendship Society.

The Internet is full of nooks and crannies hiding all kinds of technological mischief. Who do you have defending you? And what color are their tights? By Steve Mottershead

The internet can be whatever you want. Its also a place where you can be whomever you want. This film explores those ideas through the simple device of two friends and a door. By Hunter Gatherer.

Contact lenses are often seen as the more aesthetically pleasing alternative to glasses, but they are not always seen as being more practical.

Optician brand Pearle was keen to emphasise the benefits of wearing contact lenses to those who are attached to their spectacles and encourage trial of their daily and monthly lenses.

Pearle created a web-based game at thesteamyroom.be which illustrated the merits of wearing contact lenses. But rather than looking at the comfort of wearing contacts, Pearle took a more humorous angle. Players get to select whether they want to check out semi-clad men or semi-clad women and then enter the respective changing room with a first-person viewpoint through a pair of rimmed glasses. As soon as you enter the room and start to see tantalising glimpses of flesh, the glasses begin to fog up and they require frantic polishing with the mouse curser to clear the view. The message reads: “there are moments when it’s better to wear contacts”. The site has a viral element encouraging users to share the game and also offers free trials of the contact lenses. 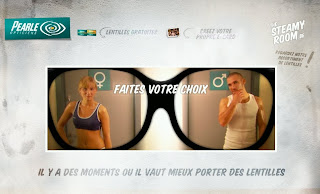 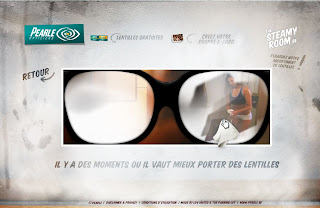 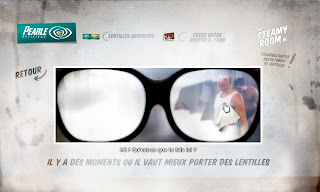