Last week, Oprah announced Kentucky Fried Chicken’s 2-piece grilled chicken promotion, causing a mad rush to unprepared KFC restaurants, and ultimately leaving 6 million customers waiting in the lurch when the offer was rescinded. Angry customers not only fumed in-person, but also turned to social media to air their grievances, causing buzz about the fried chicken chain to skyrocket.
Last February, Quizno’s, a sub sandwich chain, made a similar mistake by including a caveat in their Million Subs promotion that stated coupons would only be accepted at participating locations. Quizno’s visitors reported being turned away by disgruntled franchise owners who refused to honor the promotion, causing blog buzz about the sub chain to increase over 400 percent compared to the month before the promotion.
------------------------------ 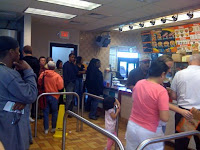 Bond & Bond – Cut to the chase

Bond & Bond – Cut to the chase

Bond & Bond sales had been declining at an average of 2.4% pa for two years. Yet the appliance retail category had been growing at 7.2%.

DraftFCB set out to reverse Bond & Bond's fortunes using advertising only. There would be no increase in advertising spend and no change to product and pricing strategy.

The agency created a straight-talking campaign that told informed shoppers in the target audience “you want it, we've got it, let's talk'.

This campaign won DraftFCB a Gold EFFIE for retail/etail.

Bond & Bond was in a difficult situation with sales declining, relentless advertising from competitors and New Zealand facing a recession.

Any new strategy for Bond & Bond could not be to the detriment of larger sister brand, Noel Leeming. The challenge was to establish a strong new position as part of a brand portfolio strategy.

Pricing and the in-store experience would not be changed so the advertising had to work hard.

Rather than traditional soft measures such as brand health this campaign had to halt the decline in sales of 2.4% pa and return Bond & Bond to growth within six months.

Mission Accomplished Shoppers are more likely to be young males or young couples. They like to research the options before entering a store and talking to a salesperson.

When they go in they want to be informed and confident. They'll know exactly what they want, or at least have narrowed it down.

They often don't accept the displayed price. They treat the in-store environment like a sporting arena. Their aim is to get the best deal possible, and the sales person is their opponent.

The Bond & Bond brand would be all about 'cutting to the chase'. The facts were delivered in a straight-talking style – the features, the price, the deal – without the over-hyped sales pitch.

This approach was summed up by a new brand-line; 'You want it, We've got it, Let's Talk.' To get noticed a humorous and non-PC approach was used to connect with the target audience.

Target: Halt the decline in sales of 2.4% pa and return Bond & Bond to growth within 6 months.

The impact of the new campaign on sales was immediate and sustained.

This was made even more exceptional given that the category began to run out of steam due to the economic downturn. (-0.6% final quarter '07, year on year)

With the category in decline, and Bond & Bond sales in growth, the trend had truly been reversed.

And despite improvements to Brand Health not being an objective:

Declining brand health measures were being reversed within three months of taking the new communications strategy to market.

The brand communication awareness trend had been reversed with most of the positive shift being driven by TV and mailers. Of those who recalled B+B advertising 29% felt more positive towards the brand and 36% claimed they would be more likely to shop there.

And the new creative was engaging the new target market in particular.

On average 60% of respondents recognised seeing the new campaign. This was greater amongst our young life-stage target audience groups i.e. 67% and 73% recognition amongst 18–44 and 18–34 year olds respectively.

Attract a Broad Audience to Blue-Chip Programming on Discovery Channel

Discovery Channel needed to create the widest net possible to capture new viewers and reinvigorate lapsed ones. Discovery Channel wanted to introduce this broader audience to the network's core promise: the joy of discovery.

Until fairly recently, the general consumer relied mainly on those deemed “in the know” - college professors, evening news anchors or media reporters - for credible information about almost everything. The knowledge sphere was small, yet the Discovery Channel, the most widely distributed cable network in the US, has long been in the mix of this lofty circle. Still, the Discovery Channel wanted to solidify its leadership position on the knowledge map. Enter PLANET EARTH. The 11-part series, with its remarkable, never-before-seen footage, gave viewers unique insight into the vast subject of natural science. PLANET EARTH needed to confirm for viewers that Discovery Channel, the cable network and the brand, remains the most credible authority for knowledge-based, quality programming.

“Earthling, meet Earth - experience the planet like you've never before”

In September 2005, PLANET EARTH positioning focus group research was conducted and found that participants reacted most strongly to the position statement: “never-before-seen animal behavior and amazing scenery ... unparalleled access to areas of the earth never captured on film”. The research also showed that interest in the program and intent to watch it was largely fueled by PLANET EARTH's unique viewing experience - our planet presented in a way never before seen. Therefore a strategy was developed focusing on showing the astounding program in as many places as possible (Source: Discovery Channel focus group resource).

Viewers had never been exposed to such an expansive natural-history project. The new effects created by the specially developed lens and aerial cameras allowed for an unprecedented look at animal behavior and captured terrestrial landscapes. With PLANET EARTH, and its groundbreaking high-definition production techniques, Discovery Channel was giving viewers a definitive look at the planet.

BRINGING THE IDEA TO LIFE

Focusing on immersive communications environments, we presented viewers with a realm of full surround-sound/sight/motion, transporting them to a “new” planet earth - one they had never truly seen before. We provided, in every consumer touch point, the sampling experience that would build interest behind PLANET EARTH and drive viewers to tune in and watch the series.

We use this powerful medium to bring the message in two ways:

We set the ambitious goal to make a Natural History-themed series the “water cooler” appointment TV event of the year. We used TV as a high reach vehicle to spread the extraordinary news that Discovery was about to launch the most dynamic natural history program on television. The sight/sound/motion capabilities of this media were exploited with a heavy TV schedule, surrounding the consumer with the most engrossing experience possible.

We used TV to reach out to and connect with viewers at key moments in television viewing: when they were watching the Oscars, celebrating cinematic excellence and the film industry. We included the Academy Awards in our top markets, as well as via the TiVo buy, so viewers watching the Oscars were targeted with - and treated to - a long form commercial for PLANET EARTH.

This media was blown out to get the message across to consumers that this was not your average natural history show. An extensive plan was negotiated to include a comprehensive teaser program consisting of :10, :15 and :30 on-screen spots. The full cinema program was rolled out with a nationwide :60 commercial and an immersive 2:30 content piece in both general market theatres and highly targeted art-house theaters. Additional sampling was also encouraged by way of DVD Table Top Displays and handouts at select movie theatres.

Visually exotic P4CBs ran in targeted publications such as National Geographic and WIRED. Magazines were also used in a non-traditional way to promote PLANET EARTH. Print media, usually reserved for two-dimensional communication, was instead used as a sight/sound/motion sampling platform for a selection of highly targeted potential viewers. Using Time Inc.'s extensive database of psychographic qualifiers, readers with particular interests in PLANET EARTH's content, and the program's visually superior high definition technology, received “sneak-peak” DVD inserts in their regular magazine subscriptions. And so those who would potentially be passionate about this kind of innovative programming were able to experience PLANET EARTH in an immersive way, triggering meaningful word-of-mouth from consumer evangelists as well as driving appointment viewing.

Spectacular OOH Boards in New York and Los Angeles brought to life the enormity of PLANET EARTH. In addition, a first-of-its-kind bus shelter program was created in New York that launched the static message of a traditional shelter into the digital age with HDTVs and Bluetooth capabilities. This unique OOH experience gave consumers the opportunity to sample Discovery's content, seeing for themselves the power and drama of PLANET EARTH. The Bluetooth capabilities (in 40 Shelters, including the 10 units with HDTV's) provided additional sight/sound/motion sampling via free downloads of PLANET EARTH clips and optional tune-in reminders.

There was a two-pronged approach to using the Internet for this campaign. First, large video units on popular web site homepages such as Yahoo!, IMDb and TV.com provided broad reach. Online was also used to fine target entertainment and nature/science enthusiasts. Rich media technologies were employed to deliver sight/sound/motion sampling within the ad unit across the entire campaign. It was an easier sell to the enthusiast audience, so extensive negotiations were made to provide low-cost video options to several passion sites including wired.com, grist.org and space.com. The outcome was a video button that worked either within a smaller space or unused white space that provided additional revenue for the sites. Our online initiatives were able to complement all other media in transporting viewers to a realm of full surround-sound/sight/motion.

Viewers were able to extend their PLANET EARTH experience by visiting the web site for the series, further immersing themselves into their remarkable planet. A partnership was developed with WildTangent and Skyworks to create and promote and a tycoon style game in which the gamer managed a Discovery Channel video crew taking never before seen footage of the planet earth. The game immersed and exposed users first hand to the expansive nature and resources required for this project while integrating sight/sound/motion into the game concept.

To supplement the vast media promotion and further encourage discussion, we reached out to online communities. We listened and responded to the audience regarding PLANET EARTH, and promoted their useful feedback about the landmark program.

This is a selection of coverage of the coverage, which was garnered for the campaign. Overall the Communications plan reached reached 678,212,153 people in the US alone. The program was featured three times on Oprah, with a full one hour dedicated to the program. It was covered in every major national broadcast outlet (across all day-parts), print outlets, and thousands of websites.

The campaign, which launched in the end of January surpassed all objectives and excelled in results across multiple touch points:

Results: “The number one network in high quality original programming delivers the most watched cable event of the century (excluding sports and news events).”

Objective: Achieve aggressive A25–54 rating of 2.10 on the premiere night airing

Results: Achieved A25–54 Awareness of 30% which more than doubled Discovery Channel's premiere week average (14%) as well as the average across all cable networks tracked by OTX (12%) (Source OTX & Nielsen).

Anything Else going on that might have Helped Drive Results?

The scheduling of the PLANET EARTH launch was particularly beneficial. The program was well timed, premiering just weeks after Al Gore's An Inconvenient Truth won the Academy Award for best documentary feature, and our collective consciousness was focused on the celebrating and protecting the earth. PLANET EARTH also coincided with Earth Day, as earth-related content pervaded the media, which included programming on both cable and broadcast networks.

Email ThisBlogThis!Share to TwitterShare to FacebookShare to Pinterest
Labels: Entertainment and Media, NPD

8 subliminal marks used in the advertising

Subliminal Coca Cola message
at May 14, 2009 No comments: