MARKETERS promoting their products online have followed a fairly standard arc historically, first buying digital ads and building their own Web sites in the early years of the Internet, and more recently amassing followers on social networks like Facebook and Twitter.

Now, companies increasingly are running online ads that focus less on pitching their products than promoting their Facebook pages and Twitter accounts.The ads, which have menu tabs and increasingly resemble mini-Web sites themselves, allow users to click within the ad to see a brand’s Twitter messages or Facebook wall posts in real time, or to watch a brand’s video content from YouTube — all without leaving the Web page where the ad appears.
•

Ritz crackers, a product of Kraft, used in-text ads to highlight its Facebook contest promotion with the television show “Glee. A recent online ad for Mrs. Meyers, the cleaning brand, for example, said, “Clean should smell better” and instructed users to “Hover to expand.” When a cursor is placed over the ad, it extends downward to expose an area that, depending on what button is clicked, displays real-time Facebook wall posts, Twitter users posting about Mrs. Meyers, or a video from the brand about Thelma Meyer, for whom the brand is named.
Although Internet users rarely click on an ad to be taken away from a page — only one in a thousand do so, according to Google — they could engage with all those tidbits in the Mrs. Meyers ad without leaving the Web page they were visiting.
And engage they did, according to Flite, the media and technology company that produced the ad.
Consumers on average spent 30 seconds interacting with the ad, compared with an average of what, according to Google, is just 11 seconds. In addition to spending more time on the ad, consumers were more likely to click on a “learn more” button to go to Mrs. Meyers’ own Web site, with 35 of every 1,000 users clicking through, compared with an average, again, of just one in 1,000.
“Brands are building a great presence on social networks and are looking at ways of making it more accessible,” said Giles Goodwin, president for product and technology at Flite.
The company refers to its technology as a “cloud-based ad platform” because it infuses ads with live content from other sites including Facebook and Twitter, and it has produced such ads recently for brands including Coca-Cola, Lancôme, Volkswagen and AT&T.
Another media and technology company, Kontera, is taking a similar approach with in-text advertising, where advertisers pay for keywords to be hyperlinked within an article or blog post. While clicking such words often takes users to an advertiser’s Web site, with Kontera, ads pop out in a window on the same page, and many ads that Kontera is doing these days highlight advertisers’ social networks over their products.
In recent ads for Ritz crackers, the Kraft brand, for example, the brand wanted to highlight a promotion with “Glee” that included a sweepstakes to win a trip to meet the cast of the Fox show on their set in Los Angeles.
On the Kontera network of sites — which include those for the magazines U.S. News & World Report, Shape and Men’s Fitness — words in content likely to relate to the show, including of course the word “glee” and the names of both the characters and the actors who play them, were highlighted. Positioning the cursor over those words caused an ad to pop out in a window that promoted the sweepstakes and highlighted posts on the Ritz Facebook page about the show and contest.
“Social media is not a tactic that stands alone from your advertising campaigns,” said Chris Karl, a senior vice president at Kontera.
The “Glee” in-text ads presented themselves to fans of the show when they were most likely to be reading about it, then ended up signing them up as followers of the brand on Facebook, which was required in order to enter the sweepstakes.
As for why Ritz aligned itself with the television show to begin, the crackers, often served at social occasions, share the show’s spirit of being “all about fun and a champion of fun,” said Sheeba Philip, the marketing director for Ritz.
“A program like Kontera’s is really effective for reaching consumers with common and shared passion points,” Ms. Philip said. “It really was a push to drive people to Facebook to learn more about the brand.”
For other in-text ads by Kontera for Verizon, the brand did not even promote its own social network account, but rather that of Will Power, the race car driver who competes in the Indy Racing League, and whom Verizon sponsors. While Mr. Power is not, of course, likely to send Twitter messages with Verizon slogans, in the photo of the driver posing alongside his car on top of his Twitter page, the Verizon logo is prominent on both his uniform and car.
•
Andy Smith, a co-author (with Jennifer Aaker) of “The Dragonfly Effect: Quick, Effective, and Powerful Ways to Use Social Media to Drive Social Change,” said incorporating live content from Facebook and Twitter allows online ads “to feel less static,” and even to be “at least as current if not more current” than adjacent editorial content.
Even if those live snippets in ads include brands apologizing about missteps or customers griping, it still could benefit advertisers because in an era when consumers actually become friends with companies on Facebook, those consumers may expect some warts-and-all human characteristics.
“There is transparency in being willing to say, ‘This is what people are saying about us,’ ” Mr. Smith said. “And with the relationships that people have with brands today, the more honest and human they seem, the more likely consumers are to like them and stick with them.”

A version of this article appeared in print on August 4, 2011, on page B3 of the New York edition with the headline: Brands Now Direct Their Followers to Social Media.

Here are two QR codes that might not get lost in the shuffle. Zara Dampney and Shauna Mullin, the British champion beach-volleyball players, have struck a five-figure deal to give gambling company Betfair sponsorship rights to their butts. Specifically, the pair will have QR codes on the backs of their bikinis—which will send people to the Betfair website when they take a photo of the players' backsides with a smartphone. The not-at-all-skeevy client rep Andy Lulham explained: "As far as we're aware, this is the first time QR codes have been used in in-play sports advertising, and what better way to test its effectiveness than by putting them on one of the places that is likely to get photographed the most." This seems like an OK idea—except Dampney and Mullin recently complained about people sexualizing beach volleyball. "Here in England we are still stuck at the stage where people think beach volleyball is about sex, not a sport," said Mullin. (She has a marketing degree and probably just couldn't help herself with the Betfair deal.) Dampney and Mullin will represent England at the London Olympics next summer, but they'll have to restrict their marketing to other events—any form of sponsorship is banned at the games. 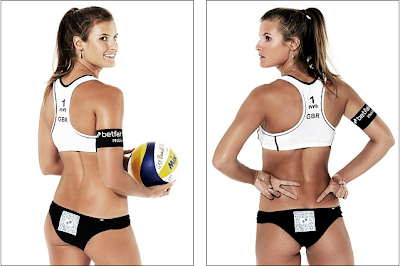