Get To Know, and Use, AIDA 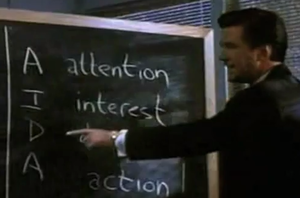 http://youtu.be/wVQPY4LlbJ4
The acronym AIDA stands for Attention, Interest, Desire, Action, and it is one of the founding principles of most modern-day marketing and advertising. In fact, it's often said that if your marketing or advertising is missing just one of the four AIDA steps, it will fail.
While that's not strictly true (a branding or awareness campaign does not necessarily need the Action step) you need to know about AIDA, and use it whenever possible. It's a rule you need to learn well before you can break it.
Where Did AIDA Come From?
American advertising and sales pioneer Elias. St. Elmo Lewis, a legend inducted into the advertising hall of fame in 1951, coined the phrase and approach. It started way back in 1899, when Lewis talked about "catching the eye of the reader, to inform him, to make a customer of him."
By 1909, that had evolved several times, becoming "attract attention, awaken the interest, persuade and convince." It's not far from the AIDA model that is now used throughout the world.
The First Step of AIDA - Attention
Also called "Awareness," this is the part often overlooked by most advertisers today. It's just assumed that people will find the product or service as interesting as the client does, but that's rarely the case. Sadly, so many ads jump straight to Interest, and thus bypass Attention, that the ad is doomed to failure. An ad can be as clever or as persuasive as you want, if no one sees it, what's the point?
To attract the attention of the consumer, the best approach is called disruption. This is a technique that literally jars the consumer into paying attention. It can be done in many ways, including:
Location: Placing ads in very unexpected situations. This is often called guerrilla or ambient media.
Shock factor: Getting people to pay attention can be done easily with a shock. This can be done in many ways, a very common one being sexually provocative imagery. Of course, whatever you do should be tied to the product in some way.
Personalization: It's hard to ignore something if it is aimed at you specifically. This is no longer the case with direct mail, as it is all personalized. But imagine reading a newspaper ad and seeing your name in the headline. Would you read on?
The Second Step of AIDA - Interest
Once you've got their attention, you have to keep it. This is actually trickier than the first step, especially if your product or service is not inherently interesting to begin with (think of insurance, or banking products).
Many companies have managed to navigate this beautifully by getting the information across in an entertaining and memorable way. Geico commercials do this very well, with the Geico Gecko and Cavemen ads adding tons of personality to an otherwise dry subject matter.

The Third Step of AIDA - Desire (Or Decision)
You've grabbed their attention, and you've kept it. Now, it's your job to create desire. You must turn the story you've told into one that is not only extremely relevant to the prospect, but also irresistible. Infomercials actually do this very well, by showing products in dozens of different situations. "Sure, it's a nice frying pan, but did you know it can also cook a whole roast chicken, and do sides at the same time? And it can make dessert too, plus it's easy to clean and takes up no counter space." You keep layering on the facts, mixing in come character and persuasiveness, until the viewer or reader has only one conclusion - "this thing is definitely for me! In fact, I'm amazed I've been able to live without it for so long!"
In the infamous Glengarry Glenn Ross scene featuring Alec Baldwin (at his very best) this step is called Decision. It's also just as relevant, but takes the additional step to assume the desire has already been fulfilled, and a decision to buy has been reached (or not, if you have done a poor selling job).
The Final Step of AIDA - Action
If the consumer is still with you at this point, you have one job left to do. It is, of course, the most important job, and is often referred to as "closing the sale." In a courtroom, this would be the final summation from the lawyer. He or she has already laid out the case, now it's time to seal the deal and convince you to agree with their argument.
The same is true with selling a product. And once again, infomercials do this well (although it's crude to say the least). After demonstrating the product, and convincing you that you need it, they close the sale with an amazing offer. This is the Call To Action (CTA). They'll start out with a high price, chop it down again and again until it's a third of the original price, and then give you a two-for-one deal and free shipping. You're officially on the hook at that point.