Starbucks are suffering from slower foot traffic and lower profits. 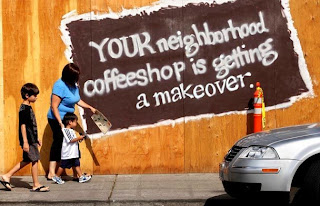 Those who can capture a sense of community and offer consumers a compelling experience will win in the long run, said Michelle Barry, senior vice president of the market-research firm Hartman Group in Bellevue.

"It's not about nostalgia per se, but more about telling a story and reappropriating some things from the past and re-imagining them in a new environment," she said.

The ubiquitous coffee-shop giant is dropping the household name from its 15th Avenue East store on Capitol Hill, a shop that was slated to close at one point last year but is being remodeled in Starbucks' new rustic, eco-friendly style.

It will open next week, the first of at least three remodeled Seattle-area stores that will bear the names of their neighborhoods rather than the 16,000-store chain to which they belong.

Names and locations for the other two shops have not been finalized. If the pilot goes well in Seattle, it could move to other markets.

The new names are meant to give the stores "a community personality," said Tim Pfeiffer, senior vice president of global design. Starbucks' logo will be absent, with bags of the company's coffee and other products rebranded with the 15th Avenue Coffee and Tea name.

In the spirit of a traditional coffeehouse, it will serve wine and beer, host live music and poetry readings and sell espresso from a manual machine rather than the automated type found in most Starbucks stores.

The changes come at a time when retailers, including Starbucks, are suffering from slower foot traffic and lower profits.

To know more about Rosi Golan or to download the theme song for this commercial
for free.
at July 22, 2009 No comments: 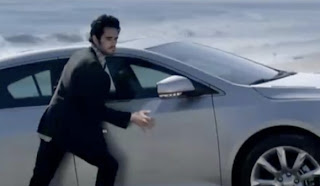 Buick has created a number of ad campaigns meant to showcase its new product and bring new, younger buyers to the brand. One of the commercials in the campaign is called "Photo Shoot," and according to a report, the recently empowered VP of marketing, Bob Lutz, isn't particularly pleased with the spot.
Both Lutz and GM CEO Fritz Henderson don't believe the commercial positions Buick as a luxury brand that competes with Lexus. They have told GM's ad agency, Leo Burnett, that it needs to do better. However -- and here's where it gets convoluted -- the ad was created by an independent shop that Leo Burnett was told to hire to do the work. Mark LaNeve, GM's head of marketing, allegedly instructed Burnett to hire Gary Topolewski, a former creative director at Burnett who worked with LaNeve on Cadillac's Break Through ad campaign, and who now runs another ad agency.

The other character in the middle of all of this is Buick VP Susan Docherty, who defended the commercial. She said it fulfills its role of promoting a revamped Buick brand, adding that she looks "forward to working with Bob and sharing spots two through six with him.
at July 22, 2009 No comments:

Email ThisBlogThis!Share to TwitterShare to FacebookShare to Pinterest
Labels: Energy

Harvard's John Quelch: How to Market Luxury in a Downturn

One of the best-known academic minds in marketing talks about the two types of luxury consumers, and how to hang onto them in a recession.

I divide the luxury market into “must-haves” and “wannabes.” Members of the first group have incorporated luxury into their lives and seek to retain that lifestyle in the face of recession. Very high net worth individuals occupy the top rung of the must-haves. They are largely inoculated from the downturn. Even if they’ve lost a lot of money in the recession, they are still ultrarich. On the other hand, those must-haves who have become financially strapped are now buying luxury items at lower price points or buying them less often, but never compromising on quality.

The luxury wannabes view luxury aspirationally, occasionally investing in luxury purchases in order to touch luxury without immersing themselves in it. They would never buy (or probably would never be able to buy) a Ralph Lauren suit. But they can afford a few lower-cost accessories such as a polo shirt with the logo.

Hold on to these customers in this economy?

You have to figure out how your customers’ behavior has shifted. Can you enable your more price-sensitive customers to continue to patronize you? It’s a balancing act, because you don’t want to taint the image of the brand.

This is more challenging at a time when cash-strapped companies are reducing spending on market research that could help them learn just how to reach those customers. Most large companies in the U.S. are cutting their research budgets by 10 percent to 20 percent. To adjust to this shift, I urge marketers to focus their research on the products, brand, and markets that are key to their strategy. Don’t waste resources on peripheral or potential consumers.

Discounting? is that always a bad idea for luxury brands?

Of course, discounts, if overdone, can detract from brand quality and the credibility of retail list prices. But modest, often unadvertised discounts on selected or discontinued items need not dilute brand quality. In fact, during a recession, even some luxury must-haves are hurting and need a helping hand in the form of a price cut from their favored brands.

Simplifiers predated the recession, but the recession has accelerated the trend. These are people who trade down to a simpler lifestyle than they are able to afford. In particular, they seek to reduce the scope and scale of the stuff they own, because they simply find it too aggravating to maintain and less emotionally satisfying than they expected. Often, as they grow older, they place more value on — and invest more money in — experiences instead of possessions.

Savvy marketers will keep this new Simplifier in mind when creating an argument for their product or service.