MegaFon, the general partner of the 2014 Winter Olympics in Sochi, with its Olympic activation needed to reinforce its customers’ loyalty and mobile internet usage as well as to stimulate mobile internet trial by other network customers in the time of Mobile Number Portability (MNP).
In early 2013 the Olympics seemed “very official and unapproachable” for most Russians. MegaFon found a phenomenal business opportunity to encourage everyone to leave their personal mark in the Games history and put its high-speed mobile internet at the core, inviting fans to write a new digital chapter of the Olympics.

Megafaces – MegaFon’s Olympic Pavilion – became a pinnacle of the five month Olympic campaign ‘Create Your Own Olympic History’ and gave everyone the opportunity for an epic “I was there” Olympic moment – for THE best selfie ever! 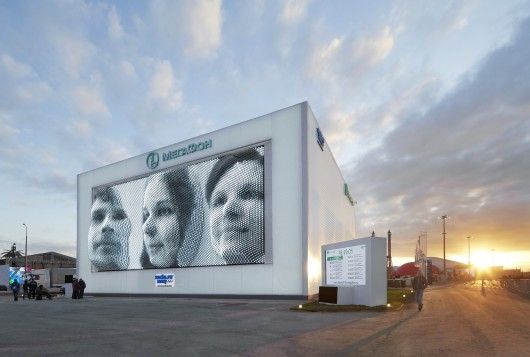 The 2,000 square metre Pavilion featured the world’s first large scale LEC kinetic façade, becoming a digital Mount Rushmore. Customers from across Russia and visitors to the Olympic Park had their faces photographed and transferred to the Pavilion façade. It was designed to function like a huge pin screen that could extend out to a depth of up to two metres. The façade of the Pavilion was made up of over 11,000 actuators and was capable of rendering 3D images eight metres tall by six metres wide. It morphed every 50 seconds, with three faces featured at any one time, enlarged by 3,500%. 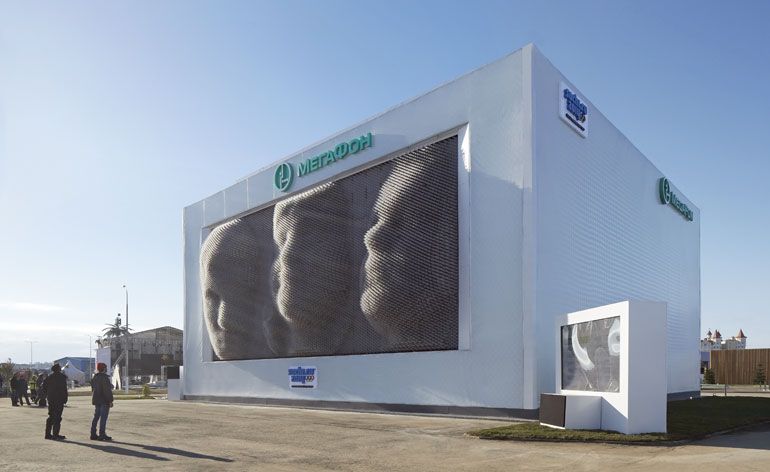 A 3D processing engine ran automatically to algorithmically position, scale and re-light the raw scan data from a virtual photo booth. The effect this created was akin to a digital tromp l'oeil – the first of its kind. 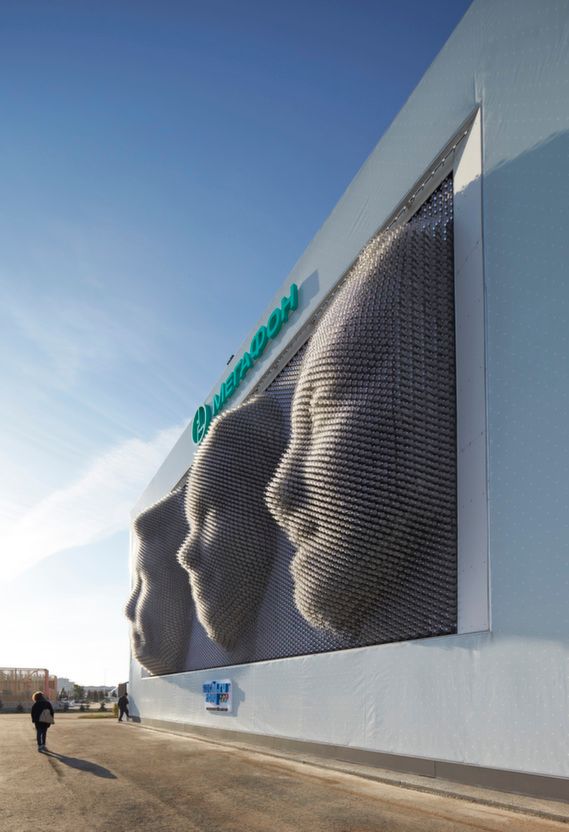 MegaFaces was a runaway success. More than 400 news articles featured in the Russian media and over 600 internationally established the pavilion as one of the iconic symbols of Sochi 2014. More than 140,000 participants’ faces were shown throughout the Games and more than 100,000 posts and tweets.
This impressive campaign was awarded the Innovation Lions Grand Prix at the Cannes Lions International Festival of Creativity 2014. 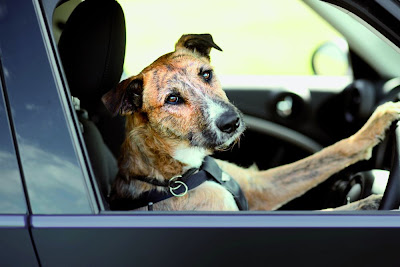 Insight
Dogs are supposed to be man’s best friend. But if the New Zealand media was anything to go by, NZ dogs were far from friendly. Reporting of dog attacks had been on the rise, with children often the victims. This negative publicity wasn’t helping the dog adoption efforts of the Society for the Prevention of Cruelty to Animals (SPCA), with interest in adoptions flat. Approaching the Christmas holiday season, a peak time for even more dogs to be abandoned, the SPCA needed help.

As a long standing, but little known, supporter of the SPCA, MINI wanted to help make a difference and raise its own brand profile in the process. But where to start? To make a difference MINI first needed to understand the barriers the SPCA brand faced. SPCA research confirmed they were facing a perception problem: the single biggest barrier to adoptions was the perception that dogs from shelters had behavioural problems. People think because a dog’s in a shelter, it must be damaged goods.

DraftFCB was tasked with creating a campaign that would benefit both parties –specifically:

1. Increase the number of people with a positive perception of shelter dog behaviour
2. Increase awareness of MINI’s association with the SPCA by 10%
3. Leverage the campaign to double engagement with MINI brand on Facebook (from 5% to 10%)
Strategy
The insight was simple: these weren’t just dogs being asked to adopt - they were family members, and no one wants a new family member with behavioural problems. With media coverage of bad dog behaviour up nearly 50% over the last two years, it’s no wonder people were nervous.

This meant that MINI needed to convince people beyond all shadow of a doubt that shelter dogs don’t have behavioural issues and are just as trainable and intelligent as regular dogs. So DraftFCB’s strategy was to deliver an extreme, real life, display of SPCA’s dogs’ intelligence and trainability to prove they didn’t have behavioural issues. But how to do this in a way that also delivered MINI’s objectives?

The idea: Prove that SPCA dogs are smart by teaching them to drive a MINI – yes, starting the engine, releasing the brake, engaging the gear, hitting the accelerator, steering the wheels and then stopping the car again!

Sound unbelievable? The agency thought people would think the same. Dogs appear to drive cars in adverts and movies all the time so people would be naturally cynical if they just made some ads featuring driving dogs. To change perceptions they needed people tobelievewhat they were seeing. This meant that how the idea was delivered was just as important as the idea itself.

So the comms strategy was to use media to make people believe the unbelievable and to do this by staging one incredible, real life media event, told by the nation’s most credible influencer. The agency would then leverage this “can’t believe my eyes” moment, scooping people up in the anticipation beforehand and then making the event famous to change people’s perceptions.
Execution

First, the dogs. DraftFCB approached New Zealand’s #1 animal trainer and selected three SPCA shelter dogs: Monty, Porter and Ginny to undergo a world-first 8 week “doggy driving” training course. Then, the car. Hundreds of unique modifications were made to a MINI, incorporating feedback from training daily. Finally, the event itself. The agency convinced NZ’s leading news and current affairs TV show,Campbell Live, to act as hosts. First, they revealed the idea, showing training footage and instructing viewers to tune-in one week later to see the event: A world-first demonstration of shelter dogs driving a mini, broadcast live on national primetime TV!

Once this teaser show had aired, the agency used social media and PR to build anticipation and hype for the event. This targeted local and global news and social media influencers, knowing that any global coverage or endorsement would fuel more hype in New Zealand.

So people could invest in the event’s outcome, DraftFCB promoted and seeded over 800 pieces of content across 11 different digital and social platforms in just one week, wanting the nation engaged and excited! As the event neared, press, radio, TV and digital reminded people to tune-in.

Once the event was over, the content was seeded via video and social outreach ensured as many people as possible had the chance to see it for themselves.
Results

In just seven days, the event was not just famous, but world famous.

- Exposed to over one billion people worldwide
- News media coverage in over 70 countries
- Over 100 million reached on Twitter
- Over 10million YouTube views
- Trending everywhere from Twitter to Huffington Post to the BBC (where it was more popular than the royal baby news!)
- Support ranging from dog guru Cesar Milan to Snoop Dogg
- The dogs even got a segment on Letterman!

1. Changed perceptions by making people believe the unbelievable:
- People twice as likely to have overcome their perception barrier once they had seen the dogs driving
- 113% increase in number of people with a positive perception of shelter dog behaviour

A masterpiece in wine 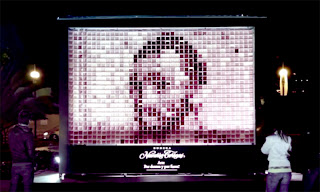 Wine labels are similar to luxury brands in that as a group, they have been collectively resistant to marketing innovation, believing that the quality of the product is good enough marketing in itself. This interactive billboard and the wider art project it comes from is a beautiful idea supported by a clever use of SMS technology.

They don't drink a lot wine in Latin America. Drinkers in France and Italy happily quaff between 50-60 litres of the stuff annually per capita, which makes the Colombian average of 0.26 litres seem a particularly restrained amount. 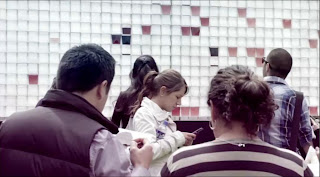 But the local market for wine has been steadily increasing over the past decade, and Argentinean label Bodega Navarro Correas has been capitalising on this trend and celebrating the work of local artists with its 'Arte por dentro y por fuera' campaign. Translated as 'art inside and outside', this campaign is based on the idea that if Bodega Navarro Correas produces a masterpiece inside the bottle, its consumers can produce masterpieces on the outside. 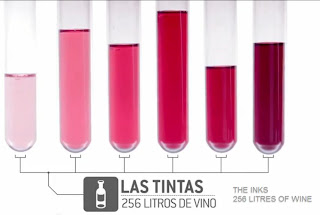 This amazing billboard in Colombia is the latest expression of 'Arte por dentro y por fuera', and proves that you can create an arresting work of art with wine, robotics and a little bit of SMS technology. 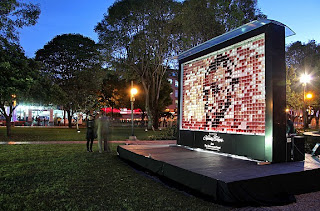 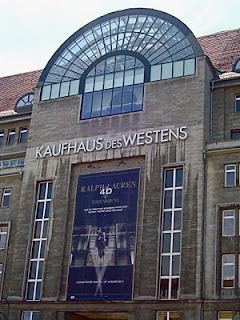 Projection events have become increasingly popular as one-off stunts. This is the first example we've seen where the technology has been employed on such a scale, indoors and for a prolonged period, as part of a campaign

Ralph Lauren has been wearing its digital heart on its sleeve of late. Much of this is down to David Lauren (son of Ralph), who as SVP of advertising, marketing and corporate communications is widely recognised as the man who has helped bring the Ralph Lauren brand into the digital age.


Luxury brands were initially a bit slow to embrace digital. Decades of high quality glossy print and expensive live shows were ingrained on the luxury and fashion marketing consciousness.


There was a superior attitude that the quality and equity of a brand spoke for itself, and luxury brands largely ignored the opportunities of digital, save for a few expensive looking flash based websites. 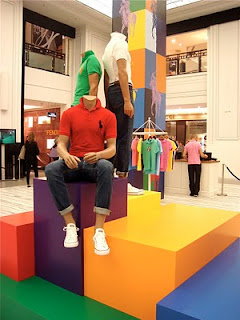 Fortunately this has begun to change, and when Drive Production’s giant horses came crashing through the walls of a German department store to help promote the new ‘Design Your Own’ collection from Ralph Lauren, the fashion brand’s mastery of digital became apparent.


When Ralph Lauren celebrated its '10 Years of Digital' anniversary with an extravagant 4D projection in New York and London in December, it was more a media event than a campaign. But when Ralph Lauren launched its 'Design Your Own' collection at Berlin's prestigious KaDeWe department store, the 8-minute film was re-configured for the indoor location.

'Design Your Own' is a new customisable range of polo shirts. Customers select their colour of shirt, and can then choose their favourite Ralph Lauren monogram, in whatever colour they choose - creating the perfect polo just for them. 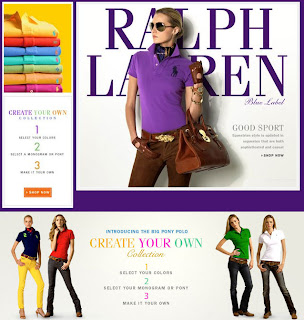 The atrium of one of Europe's largest luxury department stores, the KaDeWe in Berlin, has been taken over for the entire month of August, with a bespoke 4D digital arts installation from Drive Productions running six times a day. This is the first time 4D mapping has been used inside a fashion store anywhere in the world.
Powerful architectural projection mapping technology takes the audience on a visual journey, creating the illusion that images of models, products and on occasion polo ponies are literally appearing beyond the walls and floating out into space and towards the audience. The experience featured a new ending, to incorporate the 'Design Your Own' collection,.
At each screening, the atrium at KaDeWe - a large, brightly lit space is turned into a cinematic presentation area in a matter of minutes with the use of a combination of motorised blinds, projection screens and heavy black velvet drapes. The projection area is equivalent in size to six double decker buses. 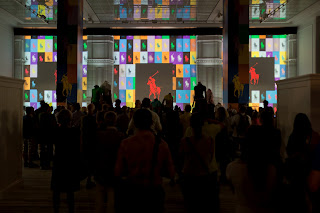 Drive's motion graphics team created the impression of a building projection on the clean, white interior architecture at KaDeWe by projecting 3D architectural geometry, onto and into which the content of the show had been mapped. 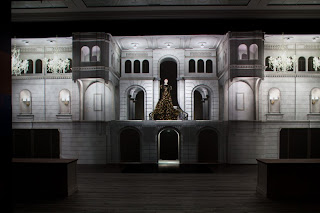 Ben Fender, company director of Drive Productions, commented: "Architectural 4d video mapping is that rare thing - a technique that still has the wow factor - both in terms of the creative and technological possibilities it gives brands and in terms of consumer reactions to it.

But the key factor to the success of this medium is the transformational content where It is now possible to create art installations that act as stand-alone pieces of global advertising- bringing together art technology and in this case 'design your own' fashion into one perfect package."