Doritos:::Ask and you shall receive

Doritos prides itself on being a brand that listens to its consumers. So, when the crisp manufacturer came across a group on Orkut – the most popular social networking site in Brazil – named ‘We want a 5kg bag of Doritos’, it decided to help realise the groups’ dream.

Doritos has always looked to engage with its young target audience in its advertising. Past campaigns have challenged consumers to create videos and participate in computer games. By reacting to the topic being discussed on Orkut, not only did Doritos involve its consumers in a two-way conversation, it also showed it is prepared to engage them on their level.

Doritos launched the campaign by showing off a giant 5kg packet of Doritos at Mercado Mundo Max, an event where new ideas and trends in art, fashion and music are put on display. 5 kg bags were then sent out to Doritos lovers and opinion setters across Brazil, including influential bloggers and advertising agencies. Finally, a live stream of a 5kg bag was put on Doritos website, as well as on You Tube and flickr, and consumers were invited to guess how many crisps were in the packet, with the bag being offered as a prize.

The campaign ran for a month. In that time, the Doritos site received 113,126 unique visitors and 41,135 bets, with users spending an average dwell-time of almost 3 minutes. It turned out to be the biggest social media campaign in Brazil in 2008, so successful that Doritos decided to release a limited edition run of 5kg bags for sale in selected Brazilian supermarkets. 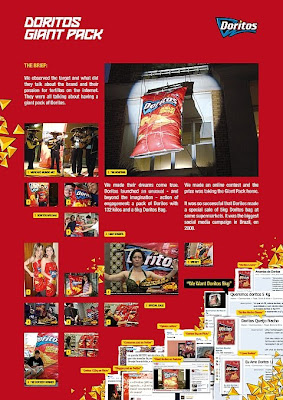 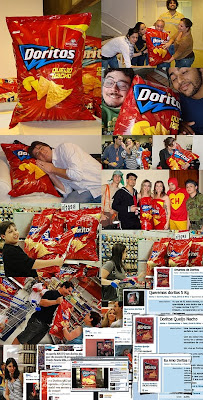 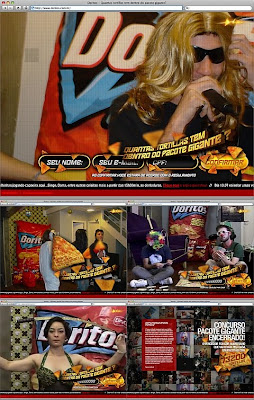 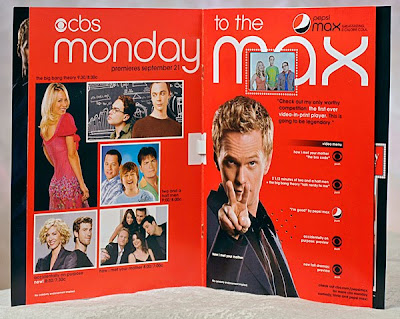 TV companies are increasingly finding themselves in competition with a raft of digital and ‘on demand’ options.
To ensure its top programmes get the viewing figures it wants this Autumn, CBS is pulling out all the stops and putting a paper-thin interactive video player into the pages of Time Inc.’s popular magazine Entertainment Weekly.

Gone are the days when TV companies could place print ads in TV Guides and expect an audience to drop everything and tune in - viewers are increasingly in control of when and where they watch their favourite programmes. In recent years, CBS has resorted to increasingly bizarre methods of generating publicity for the launch of its new shows, including advertising on the shells of supermarket eggs.

Its latest idea is certainly more hi-tech. The interactive video-player insert, designed by Americhip, triggers automatically when readers turn to the ad page. The player is rechargeable by USB, and extra footage can also be downloaded in this way too. Likely to cost CBS millions of dollars, it will come loaded with a montage of clips from shows promoting the TV programmer’s ‘Monday to the Max’, which features season debuts of ‘How I Met Your Mother’, ‘Two and a Half Men’, ‘The Big Bang Theory’ and its new series ‘Accidentally on Purpose’.
To go alongside the insert, CBS will also screen the pilot of ‘Accidentally on Purpose’ at college campuses. An online microsite will be launched featuring teasers for the show and red-carpet interviews from a Los Angeles premiere party.

Carrefour new wordmark and icon:::“Positive is Back”

With more than 15,000 stores in 35 countries generating more than 100 billion Euros in sales, the French supermarket chain Carrefour is undeniably one of the world’s most prominent retailers and purveyors of, to put it simply, good stuff at decent prices.

Its identity design, the icon and typography have remained consistent since 1966 — only nine years after Carrefour’s launch — when the C-in-a-diamond icon made its appearance next to a typewriter-style wordmark. This September 4th, along with a new campaign titled “Positive is Back,” Carrefour has introduced a new wordmark and a slightly modified icon.

Old (above) and new typography.

The resulting shapes from the C eating away at the diamond is instantly recognizable so with such a high-stake operation around the world it makes no sense to introduce something revolutionary.

The new wordmark is friendlier and quirkier, and has a nice flair to it that most serif typefaces lack, so it feels like a good birdge between the blocky slab serif of old and some corporate serif. .

The biggest change, more than the icon or the typography, is the introduction of a range of gradients for the icon. In application — which, unfortunately, we only have one small image — the concept seems like it could work and gives Carrefour a slightly trendy and upbeat look.

New TV ads for “Positive is Back” campaign.

The challenge Molson Dry wanted to position itself as the ultimate party beer. We had to connect drinkers with the brand as well as with one another. We developed a unique concept: A social reality game.
The solution We created a new sport related to a social activity: the party. Players are members of the Association of Party Pros (APP), which is supported by a distinct advertising campaign and a Web platform. The game is played in all the natural habitats of “party animals:” bars, parties, concerts, Facebook, nightlife webzines and at www.produparty.com
Credits:
at September 08, 2009 No comments: