Check these out first


Cadbury Rollpack
After the success of the Gorilla of Zingolo, and kids eyebrow dance ,they have now, with help of Saatchi Australia, managed to customize a youtube page.

Click on the image to visit the dedicated page. You will find also a parrot who plays basketball, and a man in a dog that is shit in a giant wheel.

Ads are destroying YouTube, or so it seems with this current ad from Acciona. A Spanish sustainable energy advertisement makes YouTube break into pieces.

As part of its 'Now Network' campaign, Sprint has staged a homepage takeover on YouTube using user-generated videos to create a unique human clock


Designed to highlight the relevance of Sprint's network to people's lives the campaign is part of an integrated effory to build buzz around the launch of its new Palm Pre smartphone. Selected participants used their web cam to capture a 3 second clip of themselves displaying their assigned number. The videos were then edited together throughout the day into a digital clock that showed the exact time (for example 12:37), and changed with each passing second.

The ideal fit for YouTube, the ad doesn't just demonstrate the central idea of 'now', but does so in a way that chimes perfectly with the platform's look-at-me community of contributors. Better still, the groundbreaking format is the first time user-generated content has been incorporated into masthead advertising on the site. It's just part of the wider picture, however; tailored homepage takeover ads are also set to appear on Yahoo, AOL,ESPN.com, WSJ.com, People.com and CNET in what is billed as Sprint’s most extensive web campaign to date.

More than 11 million unique users visit YouTube’s US homepage in one day, and the new masthead ad formats are encouraging experimentation and seeing good returns - 14%interaction rates, according to YouTube, compared to the industry average of just under 5% for similar-sized units.

The ad lives on after Takeover day too; it's now available as a widget at sprint.com/nownetwork, along with a host of other content intended to reflect the idea of 'now'. Goodby Silverstein & Partners are responsible for the creative.

Nintendo and YouTube collaborated to promote Nintendo’s latest Wii release Wario Land: Shake It!. The very unique site got about 1.3 million visits in one week time and blogs likeWired, Kotaku, Joystiq, GameSetMatch and over 800 others wrote about the ad. The idea of trashing a site is not new though, check Hema, Club Internet: Le Duel & Le Défi,Nationale Vacaturebank, The Good Fight, Jumper, Carhartt and Netdisaster


Honda Let it shine on Vimeo

BRAND OWNER:HondaCATEGORY:AutomotiveREGION:EMEADATE:Apr 2009 - Dec 2008AGENCY:Wieden & KennedyMEDIA CHANNELWith the launch of Honda’s Insight hybrid car, the automotive brand wanted to make a big impact without a huge environmental impact.It created Let It Shine – a 60 second TV spot which at first looks like a huge LED screen, but you soon realise the animation is being created by hundreds of car headlights. A matrix of hundreds of car headlights was created and animated with each set of headlights acting as a pixel. The ad was a huge viral hit and Honda wanted to leverage this in an online environment. It teamed up with high definition video hosting site Vimeo to create an experience which went beyond the borders of the usual flash player box, taking the traditional page takeover to a new level. 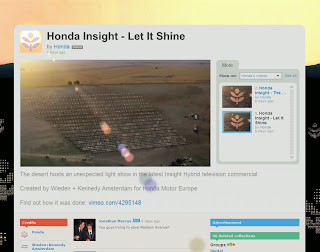 People who went to Vimeo to view the Honda ad can press play to see the video and the whole page around the video also transforms. 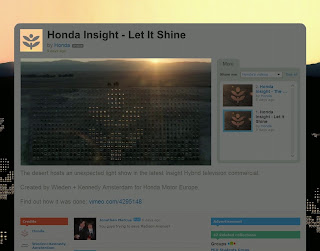 Just as the ad shows action taking place over a whole night until sunrise, so the background of the page goes completely black, blocking out all of the usual page inventory and comments. 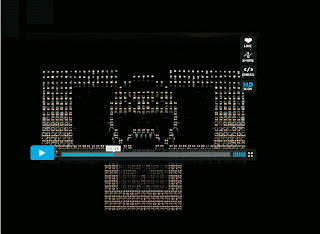 The animations created in the desert with the cars leak out into this expanded space. As dawn breaks in the ad, the background of the page also goes through the sunrise colours. Visithttp://vimeo.com/4281939 to see the experience.The work echoes that of Nintendo’s Wario YouTube ad, where the violence of the game knocks all of the comments and buttons off the web page. 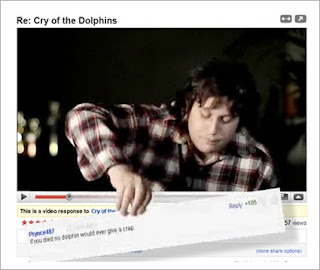 
A Sports Push with Joy

Samsung is taking over You Tube with a game. The game-take-over starts with a film of the 3D projection on the Beurs van Berlage. Then it slowly takes over YouTube. The game is nothing special (click on as many butterflies as possible  and win a 3D LED TV), but the take-over makes quite good eye candy.


======
Shahrukh Khan gets candid while discussing Ra.One! Watch him share the behind-scenes experience live, at:
http://www.youtube.com/raonemovie