Insight:
• Capitalize on limited tour of new Phantom EWB and 101EX Experimental Coupe to introduce the “new and invigorated” company
• Leverage upcoming vehicle introduction to demonstrate the performance, craftsmanship and luxury that has made Rolls-Royce the standard for excellence in any category
• Highlight features of U.K. headquarters to give journalists inside look at what makes Rolls-Royce special
Action:
• Arranged first-ever visit by U.S. journalists to Rolls-Royce corporate U.K. headquarters
• Created targeted media campaign aimed at luxury lifestyle publications and relevant national and regional press
•Spearheaded media relations in support of vehicles in select cities 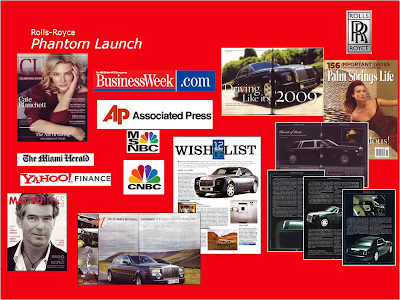 DHL:::Taking on a Duopoly: The Deutche Post Formation of DHL in the U.S.

Challenge:
After acquiring 100 percent ownership of DHL Worldwide in 2000, Deutche Post World Net (DPWN) in 2003 purchased Airborne, Inc., and overnight became the third largest express delivery company in the U.S.
Restrictions on foreign ownership of U.S. airlines caused DPWN to spin off the airline portion of both DHL and Airborne.
ABX, Inc. and ASTAR, Inc. were two new independent airlines created by this transaction, and each would contract air lift to DHL’s express delivery ground operation.
The politically powerful U.S. express delivery duopoly of FedEx and UPS quickly reacted by inserting language into the Defense Appropriations bill that required the U.S. Department of Transportation to undertake a prolonged review of the ASTAR application for an airline operating certificate.
By requiring DOT to put the issue through an administrative law judge review, FedEx and UPS were able to use the public hearing process to generate negative press about DHL and DPWN, portraying them as the “German postal monopoly,” and effectively delayed DHL’s entry into the U.S. Our challenge was to not only counter the misinformation campaign being waged by FedEx and UPS in Washington, but also to boost public perception of the DHL brand as it attempted to gain foothold in the U.S. marketplace
Action:
• to develop a strategic communications plan to counter allegations from FedEx and UPS that DHL had an unfair trade advantage by being a subsidiary of the partially state-owned DPWN.
•We waged an education campaign to correct this misinformation through Hill briefings and media interviews, and maintained rapid response to negative media coverage.
•Additionally, designed an integrated marketing campaign to articulate DHL’s world-class expertise to the U.S. marketplace, introduce the company as the new challenger brand and infuse a spirit of competition and choice into the express delivery market.
•Specific strategies included:
–A 360º communications approach that leveraged the announcement of DHL’s $150 million investment in its advertising and marketing initiatives
–Defining the DHL brand to the U.S. business community and gaining credibility as a better option through an aggressive media relations campaign
–Launching a grassroots initiative to generate nationwide media interest in the “New DHL” while emphasizing the company’s U.S. heritage through local community outreach
Outcomes:
Ultimately, ASTAR and later ABX were certified and went on to provide air lift for DHL in the U.S. By actively engaging Capitol Hill and the media, we also were able to change perceptions of DHL and DPWN among the Washington audiences.
Further, we were able to eliminate the editorial descriptor “German postal monopoly” in coverage of DPWN and DHL.
The integrated marketing campaign was also a tremendous success, and the advertising effectively increased brand awareness by 12 percent following launch.
Public relations efforts supporting the brand launch generated approximately 69.7 million media impressions, including national media coverage on CNBC’s SquawkBox, The Today Show, Good Morning America and FOX & Friends and coverage in outlets such as: The Wall Street Journal, Dow Jones, Reuters, AdWeek, and Advertising Age. The Week in Advertising Episode 21