LONDON - Sony Ericsson has kicked off its space hoppers marketing campaign, asking consumers to create their own hopper to take part in an online flash mob.

The Sony Ericsson campaign, which uses the theme ‘spark something', comprises an online film and space-hopper character creator athopperinvasion.com. The digital campaign will also feature hopper-themed activity on Twitter.

The global campaign, by Saatchi & Saatchi and Dare, is to promote the Yari, Aino and Satio trio of handsets. 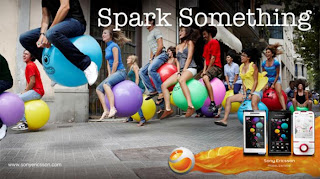 The TV campaign asks ‘What if dreams could become reality?' and features people bouncing down the street on coloured space hoppers. The ad ends with the words ‘We're here to make it happen. Make.believe.'

Sony Ericsson has been recruiting a new generation of followers with the Hopper Invasion, an interactive campaign launched with a flash mob of hoppers in Barcelona. The YouTube video points viewers to the Hopper Invasion site where they are encouraged to create their own customized hopper and sign up for updates from Sony Ericsson. It’s all part of the Entertainment Unlimited and Make.Believe branding behind three new phones, the Yari, Aino and Satio, and part of the lead up to the November 3 launch of Rachel, Sony’s first Android phone, the Xperia X10.

Mayhem. Madness. Hundreds of people. Hundreds of hoppers. Get ready for a sneak preview of what happened when Sony let a load of hoppers loose on the streets of Barcelona.

Visitors are invited to create their own hopper -- specifying eyes, nose, gaping mouth, even tattoos -- before giving it a name and entering their email address. As with all flash mobs, the time and place are being kept top secret at present; however, all participants will be informed of the exact time and place of the online invasion in which they can spot their own bouncing character.

A video shot with Satio showing the chief hopper projection on the Ericsson Globe in Stockholm on the night of 20th of October 2009.

Media was handled by MEC.

Email ThisBlogThis!Share to TwitterShare to FacebookShare to Pinterest
Labels: Marketing 3.0, Telecoms and electronics


Major brands, like Telstra, Visa, Bankwest, Subaru, and cleaning products like Omo, NapiSan, Windex and Viva, seized this unique tactical opportunity to promote their product in context of a one-in-a-lifetime event.

Most of the ads ran the day after storm, in context of editorial that illustrated the one-off weather occurrence. In Queensland, press ads also ran in the weekend; the Queensland Government alerted the public to special clean up provisions while  BP took advantage of a flood of consumers with unusually dirty cars.

These ads are a perfect example of how newspapers stand out as the best medium for advertisers to leverage their brand upon major news events to deliver smart, relevant messages that can be turned around literally overnight. 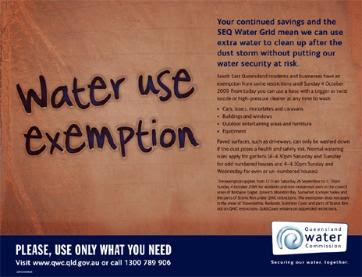 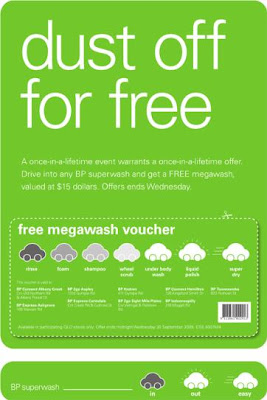 Sydney residents, and visitors like me, were treated to a change in atmosphere colour on Tuesday September 22, as a dust storm swept in from Australia’s inland. Dust particles transformed dawn skies into shades of red, orange and yellow, turning the sun blue. Wednesday’s newspapers, not surprisingly, were full of both photographs and print advertisements capitalizing on the public need to reflect on the previous day’s events. Visa’s “Go” campaign, for example, was translated into the way residents would be paying for their car wash.

Subaru presented the new Subaru Outback with Symmetrical All Wheel Drive as the vehicle for all conditions, the snow, the coast, or even a Sydney dust storm

Telstra provided a reference to the “Time to call your Mum” campaign with the question, “How do you get red dust out of white pants?”

BankWest picked up the Orange angle in their print advertisement.

NapiSan ran its campaign with the headline, “Great for stains. And dust storms”.

Viva cleaning fluids are presented as the way to “get to dust”.

Windex window cleaning products are presented as the way to work on the windows now the dust has settled.

Unilever worked with Lowe Sydney creative director Simon Cox, copywriter Matt Cramp and art director Sesh Moodley to associate Omo with the inevitable comparison of the storm with the end of the world. “A little dirt isn’t the end of the world”, the copy reads, with a photograph of the Sydney Harbour Bridge covered in red fog.

Zyrtec sponsored a Flash advertisement on the Sydney Morning Herald and News.com.auweater sites, congratulating photographers for the way they had captured the red dawn, linking to Dust Storm on Flickr and remind readers about the product’s response to hayfever and allergies.

THE GHOST ADS OF CANNES

Bogus ice cream ad
Some ads are easy to spot as fakes. For instance, it's a giveaway when the product is barely mentioned. Another clue is portraying the brand in a way that a client would be unlikely to approve. A Cannes jury a few years ago questioned a print ad by Young & Rubicam in Brazil for Unilever's Kibon ice cream in which lots of little spoons are in hot pursuit of a ball of ice cream. Legitimate enough -- except that the spoons look like sperm swimming to fertilize an ice cream ovule. To jury members, it just didn't look like food advertising, and it appears their instincts were right: Later, in the local trade press, the client denied approving the ad.
Marcello Serpa, the president of last year's Cannes jury and co-CEO, creative director at Omnicom's Almap/BBDO, Sao Paulo, says he was surprised when the disturbed festival chairman told him there was a problem with a print ad for Taronga Zoo, which had scored a Bronze Lion two days earlier. The ad, by Interpublic Group of Cos.' Lowe Lintas & Partners Worldwide, Sydney, looked genuine. But the Taronga Zoo raised an alarm, revealing the ad had been rejected because it portrayed animals in a manner contrary to the zoo's philosophy.
A pattern of fraud
Lowe Lintas and Lionel Hunt, executive chairman of Lowe Lintas Oceania, the regional division to which Sydney reports, immediately started an investigation that uncovered a pattern of fraud and ended with the firing of the Australian creative director, Mark Shattner. The agency quickly returned a second Bronze Lion, for a TV spot for Artel Australia's plastic containers, and identified a scam poster at the New York Festivals. To be on the safe side, Mr. Hunt withdrew all the agency's entries in Australian ad shows.
Mr. Hunt said at the time that the ad that started it all "was clearly ineligible on all possible grounds. The Taronga Zoo was not a client of Lowe Lintas Sydney, the advertisement had never run, and obviously the Taronga Zoo had not given its permission for the entry." This year, Mr. Hunt personally scrutinized the agency's half-dozen Cannes entries. As further penance, his agency is doing an anti-scam ad campaign for the Australian Association of National Advertisers and the Advertising Federation of Australia.
Whistleblowers or accomplices?
Although festivalgoers often say half-heartedly that award shows should do more to police the authenticity of awards, there seems to be little real pressure on them to do so. Some offenders are caught when advertisers speak up, but when it comes to scam ads, clients can be whistleblowers or accomplices.
For example, Grey Worldwide's Shanghai office was allowed to keep a Bronze Lion that came under investigation last year, for an Electrolux vacuum cleaner print ad. Cathy Chen, Electrolux's national marketing manager for Greater China, wrote to Romain Hatchuel and confirmed approving the ad. Except Ms. Chen's real ad agency isn't the Grey Global Group shop, but Publicis' Saatchi in Shanghai.
The unusual tale of a scam agency rather than a scam ad came about after Grey hired a Saatchi creative, Bok Chek Kiong. He arrived with an idea for an ad showing an empty turtle shell, implying the powerful vacuum sucked the turtle from the shell. Larry Ong, Grey Shanghai's creative director, admitted the ad only ran once, to qualify for the Cannes festival. But the client's approval of the ad, even though it was clearly created for jurors rather than consumers, along with the fact that it did run once, legitimized the entry.
"Scam ads cover a multitude of sins," says Bates' Mr. Fawcett. "There are very fine lines."
Gray areas
And huge gray areas. One of the biggest issues is whether it's acceptable to create an ad and run it once, as cheaply as possible, to make it eligible for a festival.
"I believe that even if an ad legitimately runs on TV and therefore meets the strict criteria, if it is a washing machine ad running once on a children's channel at 4 a.m. with a 0.000001 rating, then clearly it's a scam," says Ian Thubron, CEO of M&C Saatchi, Hong Kong. "I believe it is up to juries or the awards committee to ascertain what is and what isn't legitimate and award accordingly."