Mercedes enters the land of Narnia

To celebrate a partnership between Mercedes and Disney’s movie series The Chronicles of Narnia, the auto brand sought a magical online experience that bridged the two brands and harnessed the pester power of children which can greatly influence parent car purchasing decisions. A limited edition of the Mercedes Viano designed to coincide with the release of the Narnia film featured independent screens, infrared headphones with game console connection, an iPod and multimedia reader.
Together they came up with an online communication platform at www.mercedes-benz.com/narnia.
The website was a 3D world willed with adventure and inspired by the second film in the series based on the CS Lewis novels, Prince Caspian.

The interactive website is a complex 3-D globe on which the user experiences their online adventure while travelling with the Mercedes Viano model of car. The car was positioned as a modern steed; the very best place for heroes. After an archery game, the user meets their new travelling companion in the deep, dark forest: the Viano. Users can also share the site with friends by entering their email, challenge the Narnians to an ear waving contest, upload a picture of themselves to be morphed into a mythical creature or watch a trailer of the film. 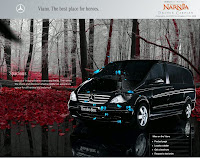 This was supported by an online banner campaign to support the launch of the website and drive traffic to it, featuring the headline ‘Beware! Enter at your own peril!’.
The site received over 100,000 visits, with an average dwell time of more than 5 minutes. The game also allowed for data capture of thousands of addresses.
at April 29, 2009 No comments:

Microsoft wanted to target those in the realms of micro-blogging, but specifically those business executives using Twitter as a way to position the brand as well suited to create business value through better collaboration.
Finding all of the business people on Twitter can be quite difficult, but Microsoft decided to sponsor a service that would address this problem.
The solution was ExecTweets, a programme which saw Microsoft sponsoring a page that collects Tweets from various executives. It opened up a business model for Twitter, which had until then not really found its commercial feet.
The service enables people to track what is on the minds of business executives including Bob Jeffrey at JWT, Facebook’s Mark Zuckerberg and Virgin’s Richard Branson. Microsoft paid to set up the page in return for getting Twitter approval and for promoting the site on Twitter itself. 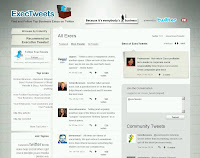 The channel offers the capacity to find influencers by topic, view their conversation and engage with them, all within a single environment. You can also recommend new execs to follow, vote for interesting tweets and users, search through a tag cloud and follow @exectweets on Twitter.
Federated Media plans to launch similar programmes on Twitter with other clients.
at April 29, 2009 No comments: 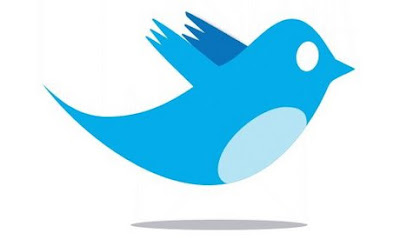 What is right:
*Twitter has the buzz and is leveraging that for talent, attention and investment.
*Twitter is addictive and fun and plays into the Social Currency model that media and storytelling is evolving into.
*Twitter has some powerful names engaged in it and supporting it.
*Twitter offers value in the nature of immediate customer service, reputation management, unvalidated search, trendspotting and conversational media.
*They allow third party software to integrate with their service, helping the open source/transparent nature of today's communications. 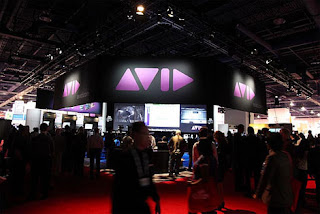 At the center of Avid’s brand identity is a new logo composed of simple geometric shapes derived from the buttons, icons and markers that consumers and professionals recognize as fundamental to the digital audio and video solutions they use every day to enable their creativity.
The new logo forms a visual connection to iconic shapes that represent “volume up, volume down, play, pause, record and forward,” signaling a unification of the company’s core audio and video offerings. The distinctive mark also spells out the company’s name in abstract letterforms.

"Avid is coming together as one company with new offerings, a new strategy, and a new operating model. We are stronger as one company than we are as separate parts, and we have a unique opportunity to help our customers achieve greater success in a digital world," said Gary Greenfield, Chairman and CEO of Avid. "Our new identity is one of the powerful ways we are communicating the evolution of our business as well as our commitment to partner with customers by understanding exactly what they want to do. Whether it's the flawless execution of a global television broadcast, a chart-topping hit song, a lean-forward moment on the big screen or in a sold out concert venue, or a home movie that family members will cherish for a lifetime, our customers want integrated, interoperable, and open audio and video offerings. By pulling together all of our category-creating technologies under one roof, we are beginning to serve our customers with digital media solutions unlike any other company in the world." 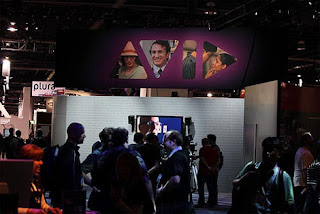 The old logo was memorable with its italic quirkiness but the new one is both memorable and relevant. At first glance it might feel like a cliche to use the play buttons as a logo, but as truly universal icons for a range of products that are accepted industry-wide, it’s the perfect use. The result is simple and bold. I could definitely do without the shading, specially being so subtle it feels unnecessary. But this will surely look great on screen and some glossy packaging. I also like the idea of filling in the shapes with images and, while it’s one of the oldest tricks in the book, Avid pulls it off nicely.
at April 29, 2009 No comments: