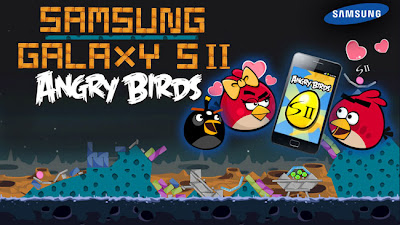 Samsung was about to launch the Galaxy SII and was looking for a partner that could help it reach out to its primary target group: mobile phone enthusiasts. This group was the earliest adapter of new technology. But that was the whole challenge: finding the correct content partner for generating the hype and sales for the Samsung SII.

The brand realised that game developer Rovia’s popular game Angry Birds would be the perfect fit to reach the TG. For Samsung, it was the perfect partnership, because Angry Birds enthusiasts were exactly the kind of mobile pioneers for whom it had tailored the new Galaxy SII.

In one of the deepest partnerships ever signed by Rovia, Samsung created a secret Golden Egg level which could only be unlocked by coming to Samsung’s co-branded site to find clues.
This was the first time that the wildly popular game had ever allowed a partner to reveal a secret new level to the game. It was also the broadest partnership ever agreed by the developer Rovio which helped Samsung to market directly to millions of Angry Birds’ biggest fans.
It was just the sort of treasure hunt that die-hard fans loved to follow - and then to boast about when they had unlocked the level. The co-branded site was central to reaching players with detailed messages about the Galaxy SII.
Samsung excluded the Samsung logo from the secret Golden Egg level itself for fear of alienating players, but it gently reinforced the brand by using Galaxy SII colours and graphics throughout.
And in a masterstroke that greatly extended the length of time users spent on the new level, this level came equipped with a special ‘low gravity’ environment as the Angry Birds were going into space. That meant it was challenging and frustratingly addictive even for veteran players, all of whom had to learn new tricks and techniques to progress.
Banner ads inside Angry Birds directed people to the Samsung site where they could find the clues to unlock the secret Golden Egg level. Samsung bought video pre-rolls and interstitial ads in which Angry Birds characters themselves told players where to go looking. Samsung promoted posts to the game’s Facebook and Twitter followers as well.
On the co-branded site, additional offerings were made to users such as competitions to win Angry Birds toys and merchandise.

The discovery of the secret level generated so much internet chatter that it wasn’t just fans who shared tips on social networks, but also technology journalists who reported on the phenomenon.
Nearly half a million users came to the co-branded site to pick up the clues that would unlock the secret Golden Egg level and almost 15,000 clicked through to the Galaxy SII product page to learn more.
The game level itself was played 1.6 million times by the time the promotional activity ended. 69% of players said the level made them think of the Galaxy SII. Brand awareness jumped 10% after the campaign period and purchase intent jumped 4%.

Any doubt that the BlackBerry 10 is central to the survival of Research In Motion was likely erased on Wednesday as the company not only unveiled its new operating system and phones, but changed its corporate name to "BlackBerry," too. "We have a fantastic brand, BlackBerry, and we are known as such all over the world, except in North America," CMO Frank Boulben said in a video interview at the launch. "We wanted to take full advantage of that global, iconic brand."
"We have redefined ourselves inside and out," said CEO Thorsten Heins, speaking to launch events held across the globe from New York to Jakarta. "RIM becomes BlackBerry. It is one brand, it is one promise." He declined to specify the company's marketing spend for the corporate rebrand and a global launch of BlackBerry 10 that includes Sunday's Super Bowl ad buy, but characterized it as in the "hundreds of million dollars."

Along with a radically different operating system, the company introduced two new phones — the keyboard-equipped Q10 and the touch-screen Z10 — which employ a gesture-based interface similar to Apple's pioneering iPhone. Yet the new BlackBerry OS offers a host of distinct features.
"Flow," for instance, allows users to move between apps with the mere swipe of a finger, while "Balance" partitions users' work and personal worlds into two distinct environments, keeping data and messages in each from intermingling.


Both phones sport a sharp 4.2-inch screen display and sports 16 gigabytes of storage, a memory-card slot for expansion and front and back cameras that record in high definition (1080p back, 720p front). Popular BlackBerry Message software enables free phone and video calls while screencasting.
Other features include Story Maker, which automatically grabs photos and turns them into videos with music, and an ability to "learn" and mimic users' writing patterns. Time Shift, its photo software, allows selections to be made from a series of quickly shot images.
BlackBerry 10 will launch with 70,000 apps including Angry Birds, Skype, Yelp, Twitter, Spotify, Foursquare, Dropbox, the New York Times and Amazon Kindle, while noticeably missing are Netflix, Draw Something, Pinterest, Hipstamatic, Instagram and major airline and bank apps.

Also on offer with the new Z10 and Q10, a vast range of entertainment options, including an integrated solution for music, movies and TV shows, with major content partners including Walt Disney Studios and Sony Pictures, Universal Music and Warner Music Group.

The Z10 will not be available in the U.S. until March, while the United Kingdom will be able to purchase it Thursday, Canada on Feb. 5 and the United Arab Emirates on Feb. 10. Verizon will sell it for $199 on a two-year agreement, with other carriers like AT&T and T-Mobile expected to offer similar deals.
Release dates and a price for the Q10 were not given on Wednesday. Asked about the delay in rolling out the phone in the U.S.,

"I really do believe that the consumer market as a whole is ready for something new," said Kevin Burden, head of mobility at Strategy Analytics, ahead of the BB10 reveal. "I have to believe that there is some level of user fatigue that plays into the longevity of some of these platforms," he added, referring to Google Inc.'s Android and Apple's iOS, which are both more than five years old. "RIM is probably timing it right.