After a successful trial earlier this year, Scandinavian airlines have announced that passengers can now use 2D code mobile boarding passes on flights operated by SAS and Blue1 across Scandinavia and Europe. 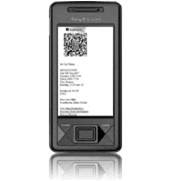 SAS mobile boarding pass (with 2D Code)
- When passengers check-in via SMS or the SAS Mobile Portal (http://m.flysas.com), check-in confirmation contains a web link and when clicked the Mobile Boarding Pass is displayed on the phone
- The Mobile Boarding Pass contains details of flight number, seat number, departure and arrival time - and it also contains a 2D Bar Code
- The 2D Bar Code can be used to register baggage at SAS Self Service Kiosks. Holding a mobile boarding pass up to the bar code scanner starts the baggage check process
- To board the plane the bar code is simply held up to a bar code scanner at the gate

SAS Mobile boarding pass benefits
Scandinavian Airlines / SAS have been pushing mobile services this year as they strive towards having 80% of passengers check-in using the internet or mobile. A few months ago a hard copy of the Scandinavian Airlines tongue-in-cheek 'Love At First Flight' guide to mobile travel solutions was sent to a large number of customers to promote SAS mobile products: 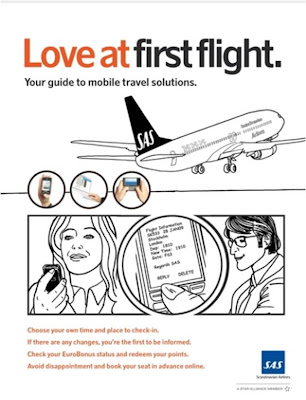 Love At First Flight guide to mobile solutions (read the whole story here)
The SAS mobile initiatives are a good example of how mobile marketing is more than just 'banners on a different screen.' Mobile should be seen as an enabler and there are great opportunities to harness mobile to improve customer experience. Full mobile check-in is a good example of this - making life easier for passengers and streamlining process for the airline at the airport.
at October 31, 2009 No comments:

It seems that Saudi companies are not yet sure about the importance of social media marketing and whether it should play a role in their marketing and branding strategies or not. Internationally, using social media tools (e.g. Facebook pages, Twitter accounts, Youtube channels, etc …) is becoming THE trend among other marketing tools and initiatives.

When the buzz about the potential use of social media in creating an added value to their brands, companies were just waiting to see how things will turn around. Justifying the costs of resources they will dedicate to build such a social media presence was the main concern occupying the minds of these companies’ managements. In other words, managers were thinking; what is the return on such investment?

The global marketing scene has moved from this basic step to discuss the specifics of having a successful presence online. The question of ‘should we have social media accounts?’ has been changed to ‘how to relate and engage with our customers using social media accounts?’. So it is not about the presence anymore, it is about the engagement. According to a study by Wetpaint and Altimeter Group, there is a correlation between a company’s social media engagement and its profit (more on this point is here). That means these social media accounts can be used as a channel of communication with customers. To be successful, this channel has to be dealt with as a long term investment and a major activity for marketing and branding teams. The presence should be alive, active, and emotionally engaging to the customers. Small gestures like saying ‘thank you’ to a Twitter customer, or saying ‘we will make sure to fix that’ on a Facebook page could make a difference with customers and boost their loyalty to the company.

Now, I have been looking around Twitter to check out Saudi companies’ presence over there. And it seems that most of them are in the trap of ‘cold social media presence’. The giant, Saudi Aramco has 351 followers only, can you believe that? Check out now the telecom rivals STC and Mobily, !

Cisco Saudi is the best company in practicing social media marketing in Saudi, they have a blog http://iam.cisco.com.sa and an active twitter account http://twitter.com/ciscosaudi beside a very good Facebook fan page with more than 1000 fans, also they are engaging with other Saudi technology blogs (sponsoring contests in tech-wd.com).

here is an interesting study http://www.emarketer.com/Article.aspx?R=1007335