For all those who've grappled with deadlines and felt besieged by Post-it notes, here's a beautiful testament to the experience. Created by Savannah College of Art and Design student Bang-yao Liu, the two-minute clip required three months of planning, four days of shooting and more than 6,000 Post-its. The behind-the-scenes video really makes you appreciate the enormity of this stop-motion project.

This is the original article of how 3M Corporation attempted to generate buzz for its sticky notes product with a user-generated content promotion about creative ways to use Post-it Notes. Displays promoting the contest — prominently displayed in Staples, Office Max, Office Depot and other office supply stores across the country — featured a photo that might look familiar to people who spend time on Digg, YouTube and similar social sites.

Here’s how a $24.5 billion multinational corporation fubars an attempt to do a viral ad campaign by refusing to pay a small licensing fee to my friend, the amateur photographer who inspired it.

Four years after the launch of the community site Digg, three years after media giant Yahoo acquired the photo-sharing site Flickr, and the same summer that YouTube reached one billion video views per day — it’s not unusual for corporations to try to reach consumers through social media channels. Savvy execs understand that social media success can equal advertising gold.

There are a couple of ways a corporate marketer can leverage social media’s power to take things viral. One of them is to find something that is already enjoying viral success and ride its coat tails. That’s apparently the route 3M wanted to take with its current promotion.

The perfect idea already existed for the 3M campaign, ready to be exploited: the Post-It Note Jaguar.

In December 2006, a bunch of people at an Internet company went down to the parking garage and covered a coworker’s beloved Jaguar with tens of thousands of Post-It Notes. Scott, a photographer and Flickr enthusiast, posted the evidence of the prank in progress to his Flickr account intending to show it to the Jag’s owner.

Next thing Scott knew, the Post-it Note Jaguar started to spread on the Internet. The photos took on a life of their own, generating tons of comments and faves from the Flickr community. The photos got reposted on blogs around the world (including the very popular blogs Neat-o-Rama and Boing Boing), hit the front page of Digg more than once, were circulated in millions of emails, were featured as a Yahoo pick of the day, and even appeared in a filmed segment on ABC News.

More than a year passes before the maker of the Post-it Note thinks to capitalize on the viral success that was this Post-it inspired office prank. After all, large multinational corporations aren’t the most nimble players — they can’t just shoot from the hip; after all, they have to dot their i’s, cross their t’s, and generally make sure everything gets approved by lawyers and stuff, right? RIGHT?

So when in the Spring of 2008, the 3M Corporation finally contacts the photographer to ask about using the photos of the Post-it Note Jaguar photos in a marketing campaign, he’s pretty sure they’ve already thought this through. He asked a friend in the photo business what a typical licensing fee for a national marketing campaign would be, and quoted that amount to 3M.

Their response? They tell him they’d rather not pay when they can just recreate the photograph themselves.

Here’s what floors me: 3M doesn’t even try to maintain plausible deniability. The 3M representative who contacted Scott comes right out and says it would be cheaper to copy the photo than it would be to license the original photos.

Scott responded to the email from the corporation’s eMarketing Supervisor and gave the company another chance to do things properly, by lowering the license fee he originally quoted (to a mere $2,000 for the entire campaign!). He was met with complete radio silence.

That was the last he heard of it until the Flickr pages and YouTube channel started getting a whole new spike in traffic, along with comments like “Hey man, I saw this photo at Staples. Congratulations!”

The point-of-sale displays prominently placed in office supply stores around the country would easily have run 6 figures in production costs alone. And if you know anything about in-store promotions, you know there are plenty more expenses associated just with getting the display space. In other words, this was a big budget production… the extra $1,000 to actual license the original photos would have been insignificant in the greater scheme of 3M’s budget for this project.

Putting sticky notes all over a car, admittedly, isn’t a completely original idea, but 3M went to pains to make their photograph look very similar to the original Post-it Note Jaguar photo that garnered all the publicity. They could have done anything, but they did this:

It’s clear they set out to create a replicate of the Post-it Note Jag and they were counting on people “recognizing” the photos. Why else contact Scott about getting copyright permission in the first place? Even the work-in-progress photo montage 3M posted on YouTube looks eerily like Scott’s Flickr set.

Now, I’m not a copyright attorney, so I’d love for someone with an intellectual property law to chime in here, but just for kicks, let’s do my layman’s check for violations of fair use:

But let’s pretend the legality of this move wasn’t even a question for now, and focus on this: Social media marketing campaigns rely on the social media community to carry them. As a marketer, you have to respect the community and its members. Ripping off community members and then turning around and asking that same community to generate buzz for your campaign is just ballsy… or stupid.

The irony: The YouTube contest rules say “Remember, creativity and true brilliance will get you noticed.” I’m hoping that 3M’s “creativity” and true chutzpah get noticed as well.

Lest anyone think I’m slamming all companies and corporate marketers for wanting to take advantage of social media, I’m not. I think there are plenty of creative ways to get your product’s name in front of social communities in ways that don’t disrespect the users.

For example: create an original marketing campaign around a concept specifically designed to be share-worthy. A recent example of this tactic is Extended Stay’s “Very Clean” Video (Disclosure: New Media Strategies, my current employer, helped promote this campaign).

Of course, corporate attempts to become viral can ring hollow, so smart social media marketers know that it helps to let the fans come up with the idea as well as leaving it to them to drive the campaign’s popularity.

Therefore some companies ensure the campaign is going to reach a wide audience by latching on to something that’s already gone viral. There are legit ways to do that. In fact, that’s what Stride Gum didwith its sponsorship of the Dancing Guy (aka Matt Harding). 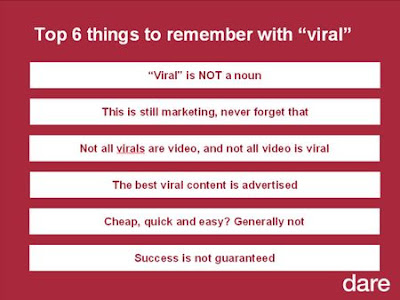 Email ThisBlogThis!Share to TwitterShare to FacebookShare to Pinterest
Labels: Marketing-Viral

Black Pencil in Graphic Design (Applied Print Graphics): UK coins by Matt Dent, for Royal Mail
Of the four Black Pencils awarded, Droga5 picked up two, Art+Com received one for their stunning BMW kinetic sculpture and Matt Dent's redesign of the UK coinage meant he also went home with D&AD's most coveted award.
Other successes included Ghost Robot's Wanderlust video for Bjork and DDB London's posters for Harvey Nichols featuring Wallace and Gromit.
"The four Black Pencil winners demonstrate the power and all-encompassing nature of creativity – in education, politics and even in the change in our pockets," says D&AD President, Garrick Hamm. "These winners are more than just great pieces of communication, they change our behaviour and touch our lives."

Black Pencil in Viral (Writing): The Great Schlep campaign film by Droga5, for the Jewish Council of Education & Resarch (US)

Black Pencil in Integrated (Integrated): Million campaign by Droga5, for the New York City Department of Education (US). Check out the film about the project by clicking on "case studies" at the Droga5 site, here

Yellow Pencil in TV & Cinema Advertising (41-60 seconds): Pinata by TBWA\Chiat\Day, for Skittles (US)

Yellow Pencil in TV & Cinema Crafts (Special Effects): It's Mine by MJZ, for Coca Cola (US)

Yellow Pencil in Branding (Printed Materials): TED 696 project (printed bags) by BMF, for Tooheys Extra Dry 696ml (Australia)
All of the winning work can be viewed at: dandad.org/awards09. The D&AD Annual 2009, designed by Peter Saville, will be published in September.
winner in the Packaging category. The Trouble Maker Campaign from the HanTang Communications Group in China for Quzhou Seezo Trading puts dictator's faces on condoms suggesting that the product's use may have prevented the birth of some undesirables...

Next up, big agency but small project, again in Packaging: the Newspaper to New Paper Project from Dentsu Tokyo for Ichida Garden. Old newspapers were overprinted to provide wrapping for fruit and veg sold by a street vendor.

In Environmental Design, Studio Rasic from Croatia won for Bijela cesta 'U iscekivanju kise' (White road 'Waiting for the Rain’). Created for the Mediterranean Sculptors' Symposium, the project is in the Park of Sculptures in Labin, Croatia. It's made from 1245 square blocks of highly polished limestone: 806 have cut-out circles which are allowed to become filled with rainwater and leaves to make the text legible.

Also from the Environmental category is the C]space DRL10 Pavilion by Nex Architecture for the Architectural Association's Design Research Lab. The Pavilion won a competition to mark the DRL's tenth birthday and was installed outside its HQ in London's Bedford Square

In Websites, Tokyo's Bascule won for the 12 CAMS, CREATE YOUR RAINBOW for Radiohead in which users could mix their own version of a live performance from 12 different cameras

Singapore's Work
won in both Graphic Design and Illustration for WERK No.16: Joe Magee Special

Two other Yellow Pencil winners have been featured by us before: Nick Asbury's Corpoetics booklet in which corporate mission statements are reworked into strangely revealing poems (we wrote about it here)

And Christopher Doyle's personal Identity Guidelines, which we covered here. Both won in Writing for Design

All the Black and Yellow Pencils awarded are listed below.

Email ThisBlogThis!Share to TwitterShare to FacebookShare to Pinterest
Labels: Awards

Wptt Contraceptive in China have won awards for their package design in a range of advertising and design award shows, most recently a Yellow Pencil at the D&AD Awards held in London this last week. Condoms are labelled with the portraits of national leaders who have been regarded as as trouble makers: Adolf Hitler, Sadam Hussein and George W. Bush. Who would you say the fourth is? “Such tragedy could have been avoided” is the tag line designed for leaders who have overseen military invasions of other countries.

Quzhou Seezo Trading’s Wptt Contraceptive is a brand known for novelty and humour. This particular packaging was part of a move to create a new level of visual impact. The objective was to emphasize the high contraceptive effectiveness of the products by indicating the painful consequences of having sex without a condom. According to the creative agency’s award entry explanation more than 100,000 people have used the condoms and the sales increased by 21%.

The WPTT campaign also won a Silver award for Package Design at the London International Awards in 2008.