We just want to say that our intern came up with this topic all on her own, after doing extensive research, and had no prompting from any of us. Although we did discuss the title with her at length. All kidding aside, she does delve into an issue close to her heart, while drawing attention to an interesting campaign being run right here in our own backyard. Enjoy.


So that’s the trick to capturing this audience’s attention. Now things are starting to make sense. When exactly does objectification of the female body cross the line of morally acceptable and ethical advertising?

I have found busty ads that I consider controversial and one that takes a completely new and unique approach to advertising focused on “the girls.”


Does the slogan “Life’s Short. Get a Divorce” ring a bell? This billboard, featuring a scantily clad duo in provocative positioning, created quite a stir a few years ago. The ad was conceptualized by Chicago divorce attorney, Corri Fetman.
Fetman created so much buzz with the racy advertisements that she was forced to take them down. She then resorted to plastering the images on box-trucks to be driven around Chi-town. Fetman also claimed to have been the busty woman in the ads; it was no surprise she was later approached to pose in Playboy Magazine. Shockingly, she accepted the offer.

Another advertisement, for a procedure some consider inappropriate and many consider a great contributor to the objectification of women, is this one centered on breast implants. 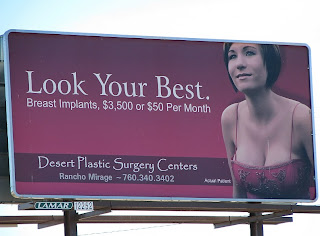 It is not the content of the billboard that is the problem here, and sure, the imagery used is, well…a little risqué. But the real issue here is that this billboard was placed directly outside of a military base in Morongo Valley, Ca—a base populated mostly by males. Yeah.

I suppose it is assumed that while soldiers are leaving the base headed home, this advertisement would motivate them to purchase their girls at home a lovely set of…well…girls. I can’t wait to welcome back my soldier with a loving hug, a warm, home-cooked meal and my new efforts at becoming a Pam Anderson look-a-like, DDD’s and all. “Welcome home, honey. Thanks for the gift.”

The sheer concept of targeting this billboard towards men, positioned in a place where mostly men would see it, seems to be what I like to call the “bissue” – the big issue. Alright advertisers, let’s think this one through. How do you suspect a man would propose the idea of implants to his girl? “Oh honey, I saw this ad today for a boob job on my way home from work and immediately thought of you.” SLAP! Now ladies, if you want to enhance your bustline, go right ahead. I am all for it. But if your man is the one making the suggestion, well, your fist hurts even more when holding a roll of quarters.

On the flip side of all of this, I found an ad campaign that is entirely focused on women’s breasts but is done in a tasteful and professional manner. It purposefully causes some excitement, but that’s only temporary until one learns who is behind this campaign.

I was driving through Baltimore city when I noticed a sign similar to the one above. I was completely shocked. So, I went home and googled the tagline. Bingo, I responded in exactly the way viewers were supposed to. I succumbed to this example of effective advertising. And here is what I learned.
This new campaign is implemented by the Maryland Affiliate of Susan G. Komen for the Cure. Signage like the one above has been placed all around Maryland trying to rally support. The organization has also released other forms of advertisements to get the word out.

According to a press release from the organization’s Development Director, Lenore Koors, the campaign is “based on the premise of ‘telling your story’ and the physical and emotional connection to local breast cancer survivors and co-survivors.” These pro-bono marketing services were provided by PUNCH of Sykesville, Md., says Koors, as an attempt to let the “Thousands of Maryland breast cancer survivors know they are not alone in their fight and to offer them the opportunity to tell their stories – firsthand accounts of their struggles with this disease, their treatments and their successes.”
This concept was to include ten local survivors who were chosen based on their stories submitted to the organization’s website. These women provide real life case studies to be used in the campaign. They were also photographed and filmed for PSA and webstory materials. Koors adds that these women are the “Faces of this campaign, and the faces of hope.”
The organization also has a facebook page where other women can share their own empowering stories and submit pictures of themselves, yes indeed, supporting their own local breasts for a chance to win some fun Komen prizes. 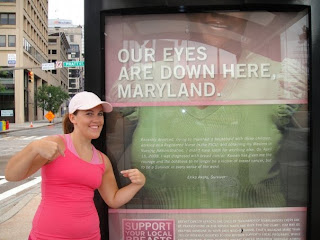 
Check out some of the ads seen around town: 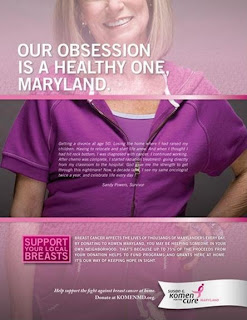 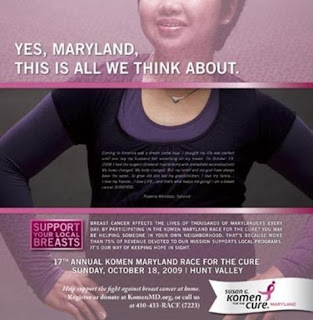 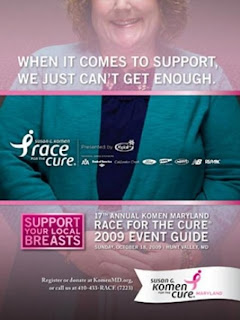 I personally like this campaign and the organization’s approach to capturing attention. With these innovative headlines and strategically centered images, Komen Maryland is driving the point home that breast cancer support is the most important thing to beating this horrible disease.


But I have to wonder, is this campaign acceptable to me simply because of the nature of the organization and because this is a good cause? Or is this a creative, tasteful and well thought out spin on what so many beer companies and car magazines having been doing for decades? After all, in advertising there is such a thing as too much boob. But as far as this campaign goes, those girls at Komen have this girl’s support.
-Amanda Gazi, Creative Department Intern
at November 06, 2009 No comments:

Email ThisBlogThis!Share to TwitterShare to FacebookShare to Pinterest
Labels: Insensitive and Offensive ads