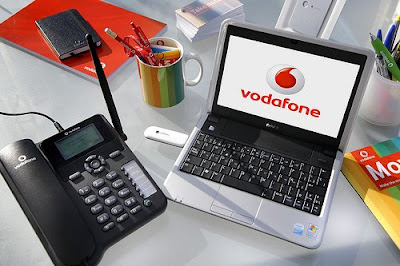 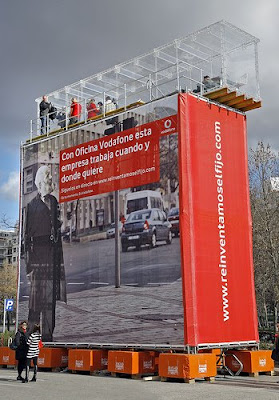 Vodafone took advertising to new heights, using their own employees as guinea pigs in a very public demonstration of their new wireless mobile office rangeTo ensure maximum exposure for the Spanish launch, theWaskman agency set up dedicated Vodafone offices in Madrid and Bilboa... 10 meters in the air, where everyone could see them!

The purpose-built glass 'office' spaces were constructed above billboards promoting the new range and for three weeks the Vodafone teams could be seen hard at work in an entirely wireless environment.

The campaign was also taken online as employees documented their experiences through a website - containing stories about the benefits of not being tied down to a single space - as well as a blog. Vodafone employees even took to the streets in modified golf carts equipped with mini offices to further demonstrate the total mobility of their new range.Main Website
Blog 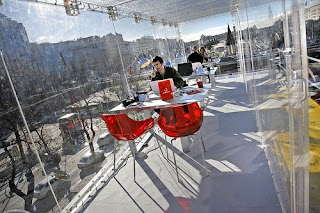 Email ThisBlogThis!Share to TwitterShare to FacebookShare to Pinterest
Labels: AMBIENT, Telecoms and electronics

Coffee cups were stikced on the taxi roofs as eyecatcher. 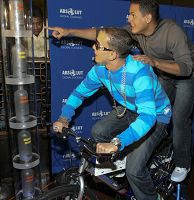 Absolut adapts a global initiative with thoughtful segmentation, creating empowering experiences where people can see that making a difference doesn't have to be a chore."

Absolut Vodka wanted to do its bit to help combat global warming as part of its thought provoking “In an Absolut World” campaign. The brand created Absolut Global Cooling to encourage consumers to reduce the effects of global warming by offering simple steps they can implement in their daily lives. The marketing challenge was to engage US Hispanics of legal drinking age to be socially conscious and contribute to the Global Cooling initiative.

The US Hispanic neo-yuppie was identified as an important segment of highly educated affluent consumers aged 21-39. Absolut created bilingual communications including radio, bar/club activation, retailer point-of-sale and celebrity endorsement. Absolut teamed up with Reggaeton artists Angel & Khriz to drive the Global Cooling message in bars and clubs with “Absolut Lights Out” parties. People were encouraged to compete to produce energy through human-powered generators and bicycles. If enough energy was created, a six-foot pillar of Absolut bottles would be fully lit. Hand held devices also stored energy that was used for the anticipated Lights Out moment, which was announced by the DJ with a countdown. The lights in the club would then be turned off for one minute. Then Lunix balloons, generated by human energy would illuminate the whole venue.

There were more than 20 Lights Out Parties, which lead to an increase of on-premise sales of around 5% over the duration of the programme.


Never let a good opportunity pass you by...

This off-the-cuff stunt chimes perfectly with the brand's new "Doing it Right" initiative which spotlights RONA's sustainable development efforts, including the sale of eco-responsible products, its paint recycling initiatives and its new policies on pesticide sales and wood products procurement.

The photos which you take can then be downloaded in high-resolution to be used as wallpaper, or bookmarked/shared viaFacebook, Digg, Mister Wong or Delicious.
Berlin-based Scholz & Volkmer is resposible.
The German automaker surprises us with an impossibly slick interface on a new website to promote the E-Class Coupé 'Now you can witness for yourself how the elegant Coupé engages the admiring looks of all those around it, and discover its beauty through the eyes of 30 beauties.'
Celebrating the launch of the new car, German supermodel Julia Stegner was photographed posing artistically alongside it - by iconic fashion photographer Peter Lindbergh. Extending ther comparison of these two 'beauties' is an interactive site which features not one, but thirty models positioned around the car.
The interface allows users to switch seamlessly between each model's viewpoint and then use any position to take their own arty shots. By flipping a simple switch, the screen turns into a camera viewfinder; the frame can be dragged around and a zoom function lets you zoom in, with the interface automatically focusing your composition. Once your shot is taken, flipping the switch off reverts the screen back to the model's view, from where you can continue to explore all that attractive 'bodywork'...

"This has interesting ramifications for social media sites going forwards. It is foreseen that the current status quo of having few big networks is unsustainable, and that social networks will start to splinter into communities of interest (travel, music, food, etc.). As this happens, there's a matured opportunity for advertisers to partner developers on specific apps targeting niche audiences. Companies which have already proved their credentials will become big players. Advertisers, start taking note of up-and-coming developers - these guys could be your business partners sooner than you think!"
Developers move beyond second fiddle status and begin to rival social media sites themselves in revenue terms

Developers creating apps for social media sites are emerging as a profitable force in their own right, collecting revenues that look set to eclipse Facebook’s income from advertising.

Happily, a fascinating article from AdAge.com - link to the full text below - finds that the world’s biggest social network is benefiting from their success: the site is expected to earn $500m in 2009 revenue from such apps.
Social gaming company Zynga, for instance, is the top developer on Facebook. The lion’s share of its revenue comes from the sale of chips for its Texas HoldEm Poker (pictured, right, along with other titles published by the company). Weapons in Mafia Wars (pictured, above) are also a money-spinner for the company. Zynga is expected to take over $100 million in 2009.

According to AdAge, there are at least a half dozen other companies in the $10 million to $50 million range, as well as a clutch of smaller players.
at May 26, 2009 No comments: