CEO Todd Davis was so sure that his company, LifeLock, would be able to prevent identity theft, he published his social security number in ads all over the country. As was expected, no fewer than 25 attempted thefts on his identity occurred in the weeks that followed. A few of them even worked, and Davis lost money to a thief that was able to successfully secure a loan. Though Davis still swears by the LifeLock’s security, it’s safe to say the company never used the “I Dare You” tactic again. 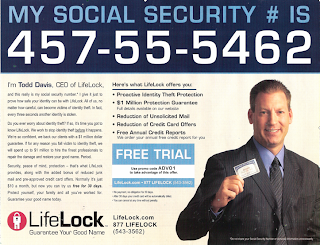 What People Watched the Week of Aug. 17

NEW YORK (AdAge.com) -- As they have for the past several weeks, Evian with its roller-skating babies and Microsoft with its gigantic waterslide continue to battle it out for the No. 1 spot on the Viral Video Chart. Both campaigns have started to lose momentum, but they both racked up enough views in the past week to give them more than double the next-closest video, which happens to also be a Microsoft one (the Project Natal trailer, which has lingered on the chart since its debut at E3 in early June).

A terrifying -- and thrilling -- five-minute video of stunt cyclist Danny MacAskill jumping fences and off of roofs in Edinburgh, Scotland, is the week's fourth-most-watched piece. The video, which actually launched in April and has since racked up almost 10 million views, has received a bit of attention of late, including in Ad Age, helping to boost it onto the chart. It's lightly branded by Inspired Bicycles -- so lightly, in fact, that Visible Measures, which collects and analyzes the data we show here, just recently classified it as "branded" -- a prerequisite for making this chart.

Meanwhile, Office Max reprised its "Penny Pranks" campaign, in which it records, via hidden cameras, the reactions of sellers when its actors try to pay for high-ticket items in pennies. The company launched the campaign last year with comedian Matt McCarthy doing the buying; this year he's joined by a 10-year-old "billionaire sidekick." The push, which also includes TV and radio, is meant to promote the office-supply chain's 1-cent deals on supplies such as rulers, crayons and notebooks.

Microsoft apologized Tuesday for using photo editing techniques to change the race of a person depicted on the company's Web site.

In a photo on the company's U.S. Web site, three businesspeople--one black, one white and one Asian are shown as part of a pitch for Microsoft's business productivity software. In the same photo on the site of Microsoft's Polish subsidiary, a white head is placed over the black person's body, although the hand is not changed.

The move sparked controversy after it was noticed, quickly making the rounds on Twitter and various Web sites.

"We are looking into the details of this situation," a Microsoft representative told CNET News. "We apologize and are in the process of pulling down the image" from the Polish site. Microsoft also apologized on its corporateTwitter feed.

And here's the one from the Polish site (click to enlarge):

Audi, which has been associated with the four interlocking rings since the formation of the original Auto Union in 1932, and synonymous with the logo since the revival of the brand in 1965, has given its long-running logo a minor update for the 21st century.

While the rings already look fairly modern with their three-dimensional texture and shadowing, Audi decided to shine them up a bit. The result is a finish that looks like polished chrome and is nearly as authentic as seeing the real thing emblazoned across the hood of a 'Bahn-stormer.'
Further embracing a more modern, simple style is the Audi name itself, which has moved down away from the rings and to the left of center. More importantly, it has shrunk and has abandoned its exaggerated, unconventional font (seen in the old logo pictured to the left) in favor of a plainer sans-serif font.

The end result is a very chic, modern take on an ageless design. Expect to see it quietly make its way onto Audi's website, signage, documents, and more worldwide as the brand continues to refresh itself during its centennial celebration

Audi Type replaces Audi Sans, a modified version of Univers Extended a Roman and Extended type family commissioned by MetaDesign from Paul van der Laan and Pieter van Rosmalen. Along with being part of the new logo,

The new type family can be seen in full action in the 2008 Annual Report, available as a PDF. The result is a strikingly modern and contemporary look that blends quite well with the Audi cars, slick and sophisticated. For a few more images and background, please visit FontFeed.

The new 2010 Audi A4 Allroad at the Geneva Motor Show 2009, with the new typog raphy.
If you look closely at some recent print ads from Audi you may discover a subtle typographic restyling. The automotive constructor stopped using the modifiedUnivers Extended called Audi Sans intro duced 12 years ago by MetaDesign, and switched to AudiType. MetaDesign – which is respon sible for this facelift as well – commis sioned Paul van der Laan (Type Invaders) and Pieter van Rosmalen (Caketype) to design the new corporate face for Audi. Both Paul and Pieter studied type design at the KABK (Royal Academy of Arts) in The Hague, The Nether lands.

Print ad for Audi Quattro, Switzerland
Neither Audi nor their CI agency have released an official statement about the typographic relaunch yet. Without knowing their exact motivation I think I perceive the politics of baby steps. The foundation, or may we call it the “chassis”, is preserved – character width, grey value, metrics – while the bodywork was refined. And this is very elegant, away from the static towards the dynamic, the high-​quality.
: : E D I T : :
Some extra clari fi cation about the new typeface. We have been told that Audi Type was built completely from the ground up. Although its character has indeed been preserved up to a certain point, the character widths and spacing in the new typeface are actually quite different. Normal and Bold are somewhat of a darker colour, and ascenders and descenders are longer than in Univers to guarantee optimal legibility in the smaller point sizes.

One of three covers of the 2008 Annual Report

Detail of the table of contents, from the 2008 Annual Report. Audi Type currently exists in Normal, Bold, Extended Normal, and Extended Bold. Italics are under devel opment, and Greek and Cyrillic will be produced subsequently.

At Typo 2007 MetaDesign’s Carl-​Frank Westermann explained in great detail the strategy behind the Audi Sound Branding, specif i cally the acoustic endings of the commer cials. By applying minute inter fer ences in the overtones the MetaDe­signers lent a higher quality to the two seconds. This scenario seems to work perfectly well for typog raphy as well.

Paul van der Laan and Pieter van Rosmalen will launch their new venture Bold Monday in the near future. At Robothon Pieter handed me a set of very nice postcards with sneak previews of the typefaces. More details to follow, and sooner than you might expect.