The 1000 most-visited sites on the web

Google's Doubleckick Adplanner has published its April top 1,000 most visited sites on the net. Essential reading for anyone needing to know their way around.
Here's the top 15 below, and click here for the full top 1,000. 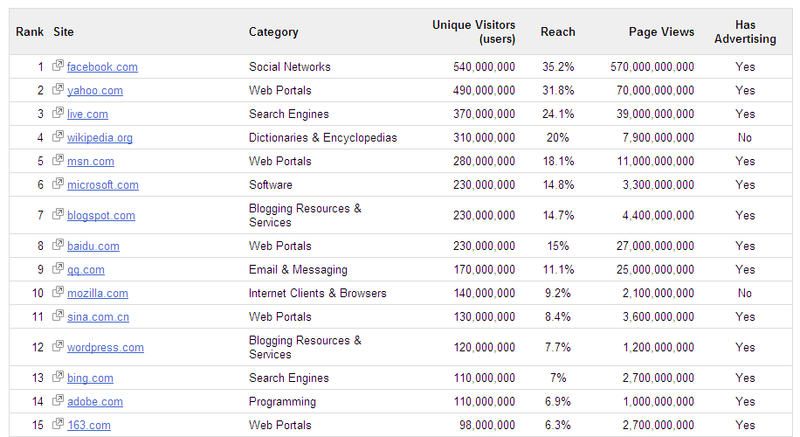 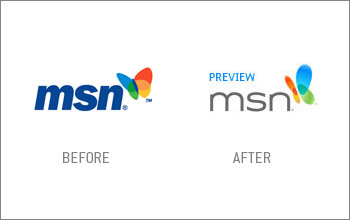 MSN has done a major rebrand on its image. I gotta say that I like the direction it’s going with the thinner font, and the new upgraded butterfly. They have released a preview of the new site, which you can see here. If anyone has any more info on the logo please comment. What are your thoughts?

Microsoft Soft Launch New MSN.com
It has been reported that MSN.com is rolling uot a new version over time. You can preview the new version at http://preview.msn.com.

I never knew that more than 1/3 of all Internet users worldwide visit MSN every month. 400 million people per month. Thats nearly as good as Yahoo’s 600 million and killing AOL’s 80 million. But still, it’s the most popular Internet portal that no one actually ever goes to.

In the new version everything is a lot cleaner and easier to read. They have integrated Facebook and Twitter nicely and more videos. Additionally, you will notice the simplicity of the Bing search bar which provide no clutter.

Microsoft have also reported that more than half of their monthly visitors use Facebook on a monthly basis, as well as 15% using Twitter. These are the key reasons why these services are added but not much else.

Email ThisBlogThis!Share to TwitterShare to FacebookShare to Pinterest
Labels: Microsoft

Microsoft has jumped into the retail arena and opened its first store in Scottsdale, Ariz., featuring interactive technology and a sleek modern design. This is the first of several planned stores for the software giant, the next opening on Oct. 29 in Mission Viejo, Calif., and is being celebrated by the company as an opportunity to connect with customers and elevate the Microsoft brand. But some analysts see this move into retail, and even the design of the stores, as derivative of archrival Apple.

Massive LCD screens line the walls, displaying scenic panoramas (including of the local Arizona landscape) as well as Microsoft products. Below these screens PCs set up with Zunes, Xbox consoles and headphones are available for visitors to try out, and a “gaming zone” offers giant screens on which customers can play popular games including Rock Band and Halo.

“Our customers have told us they want choice, better value and great service when shopping for technology, and that is what we will deliver through our Microsoft stores,” says David Porter, corporate vice president of Microsoft Retail, in a statement. “We want to showcase what’s possible with the full Microsoft brand.”

The opening came in time for the company’s new Windows 7 operating system and these are prominently displayed along with the PCs, Xbox consoles and range of other software and hardware that flank both sides of the store.

But much of the clean, simple look of the new store bears a striking resemblance to Microsoft rival Apple.

“Launching a Microsoft retail store, these guys are playing catch-up to whatever Apple does,” said Rob Frankel, branding expert and author of the book “The Revenge of Brand X.” He points to the design as looking different, but really just a variation on the Apple store’s sleek and simple design. “Microsoft has no brand. They have an identity and they have very high awareness, but try asking two people why they insist on Microsoft and you’ll rarely get the same answer.”

Microsoft is emphasizing the personalization that the new stores will offer, with consumers able to customize their hardware with external “skins” and create an original ring tone for their Windows mobile phone. When a customer purchases a computer, they will have a 15-minute session with one of the employees to get set up their applications, passwords and personal preferences. The store includes a Microsoft Answers Suite, where technical advisors offer assistance to patrons with tech issues.
“The idea of customizing a product on a mass scale, there’s a branding experience about that and there’s a connection with the customer -- all that stuff is usually good,” said Scott Testa, professor of business at Cabrini College. But Testa supports Frankel’s outlook on Microsoft’s originality as a brand: “Microsoft copies everything from Apple, so why wouldn’t they copy their stores?”

Testa believes that in opening stores when it has, Microsoft followed the company pattern of waiting until something was “tried and true” before jumping in. Nonetheless, he believes that entering the retail arena will be a good thing for Microsoft, and that it is better late than never.

“I don’t think they see it as a big profit driver. I think they see it as a brand-building experience and marketing experience more than anything. This will be a grain of sand on the whole beach of Microsoft’s revenues and operations,” said Testa. “But from a branding perspective it makes a lot of sense. The timing’s good, they get some press for the stores, Windows 7 is coming out and the holiday season is coming up. It makes sense.”
at October 26, 2009 No comments: 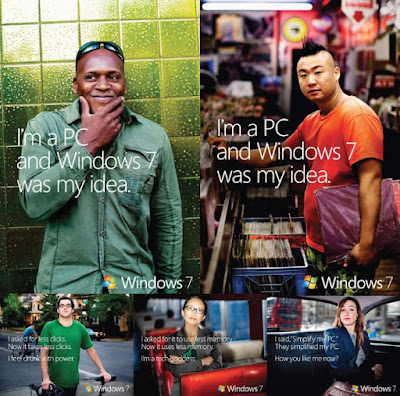 Nearly a billion people use Windows. Their ideas added up to Windows 7. Learn more about Windows 7: http://www.microsoft.com/windows/windows-7/

Microsoft apologized Tuesday for using photo editing techniques to change the race of a person depicted on the company's Web site.

In a photo on the company's U.S. Web site, three businesspeople--one black, one white and one Asian are shown as part of a pitch for Microsoft's business productivity software. In the same photo on the site of Microsoft's Polish subsidiary, a white head is placed over the black person's body, although the hand is not changed.

The move sparked controversy after it was noticed, quickly making the rounds on Twitter and various Web sites.

"We are looking into the details of this situation," a Microsoft representative told CNET News. "We apologize and are in the process of pulling down the image" from the Polish site. Microsoft also apologized on its corporateTwitter feed.

And here's the one from the Polish site (click to enlarge):

Email ThisBlogThis!Share to TwitterShare to FacebookShare to Pinterest
Labels: Microsoft 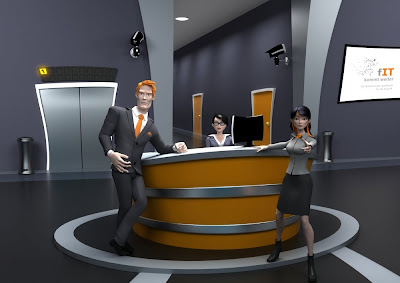 Microsoft turned its technological skills to become problem solver for the German government. As part of its Citizenship programme, demonstrating commitment to supporting IT education, it created Agent Attack IT – Germany’s first multiplayer learning game.
Businesses in Germany are crying out to see tangible evidence of IT skills in graduates, but with school kids overloaded with exams, there was little leeway for the government to add in extra class-time. Microsoft’s solution - take learning into the kids’ world.
Agent attack IT takes the format of a secret agent game, where the player has to sort out IT problems without blowing their cover. Once players have successfully completed the first stage they are allowed to compete against each other. A high-score table was designed to encourage repeat plays.
The results were positive. 21,000 users registered in the first 6 weeks. Overall there was a 71% reach. 2 user-groups on Facebook and SchulerVZ were set up and various requests for school accounts came afterwards. Each player learnt everything they would have done in a conventional IT module, but in a fun, interactive way.